"Knowest thou the land, where the lemon trees bloom,
Where the gold orange glows in the deep thickets gloom,
Where a wind ever soft, from the blue heaven blows,
And the groves are of laurel and myrtle and rose."
- Goethe 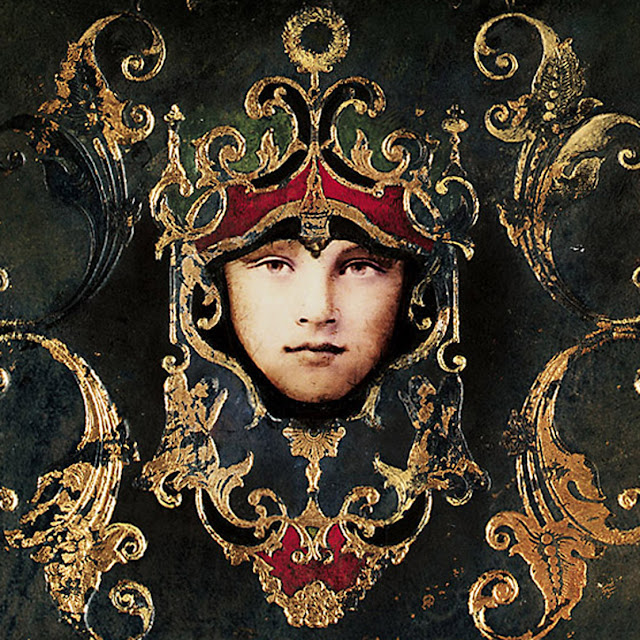 The Visions of Vespertina is a collaborative music project created by Greg Spalenka and Michelle Barnes. They began the project during the eighties while living and working in New York City as professional illustrators. Michelle and Greg aligned their creative juices fusing their passions for art and music. As they worked on the music, a story of unrequited love emerged. Together they laid out their premise and after a six year gestation period birthed the CD, complete with a 24 page color booklet of their art. Later the CD was picked up by Celsius Records and can now be purchased at Greg's web site. I have lived with the music and story of Vespertina for over ten years now, facilitating Greg with story points as he morphs the initial story concept into a graphic novel and eventually a film. My knowledge of medicinal herbs, alchemy and mystics has been quite useful. Greg and Michelle had asked me to create a scent or series of scents for the CD several years back, but, the timing was never quite right. While Greg and I were in London in 2005, we came across a poster of the painting “Vespertina Quies” by Edward Burne-Jones. It was this painting that inspired Michelle to title the CD, “The Visions of Vespertina.” The introspective looking young maiden stands on a balcony, looking out as she gently touches a ring on her finger. Thus, the painting informed their original story for the CD. 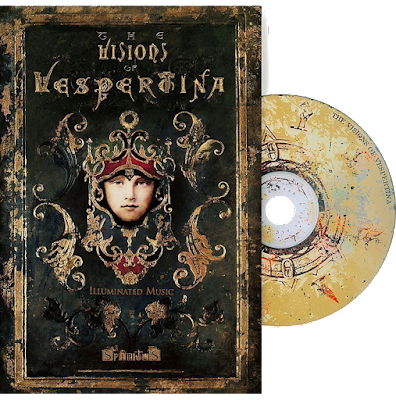 Just before Comic Con 2007, Greg asked if I would create a signature botanical fragrance for the CD that would be showcased at the booth next to the music, creating a three fold sensorium; music, art and scent. Thrilled with the creative challenge, I quickly accessed all the Vespertina files in my minds eye and began working. Having been given complete artistic license by Greg, I decided to focus on creating the scent of Vespertina, the heroine. I asked Greg for some any relevant themes he felt were crucial to the concept of the fragrance. He shared the image of Vespertina manifesting a metaphysical rose and then placing it into Dante's heart. Perfect! 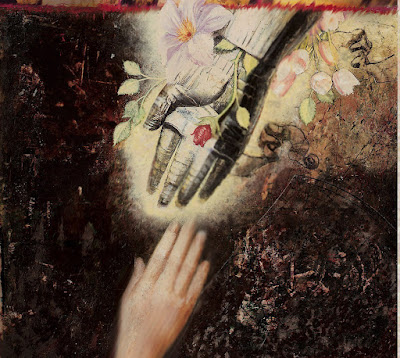 I decided to build the perfume around rose and other supporting floral notes. This alligned well with what I know of Vespertina’s devotional nature and her feminine qualities. Since the female character is a visionary mystic I wove in some of the essences I associate with this archetype; lotus, sandalwood, oud, frankincense and myrrh. The essences just mentioned indeed anchor the scent and have strong connections to the divine. I included chords of wood and amber to bring in the element of the earth. One of my teachers and friends, Gail Adrian, refers to cypress as having an affiliation with death. Several types of cypress were included to facilitate fixation as well as bring in the story element of the souls journey after death. The base also contains Angelica for its connection to the realms of the angels and the inner landscape. The heart revolves around rose and jasmine, supported by several other floral notes including lotus. Rose, as mentioned previously has a strong presence in the story as well as aroma therapeutic associations with the heart and healing. As I worked on this perfume I had Greg give me his feedback regularly to make sure that the fragrance was on track with his beloved character. There is a specific mystery in the story that has been woven into the perfume. The heart of the fragrance also includes several herbal notes relating to Vespertina’s upbringing in an fourteenth century English convent. The top notes include mainly citrus and spice topped with a bit of pepper for sparkle.

I combine my skills in aromatherapy, botanical perfume and symbolic story as an illustrator when building a perfume. However, I must admit that divine forces are called upon and indeed interact in my formulations. 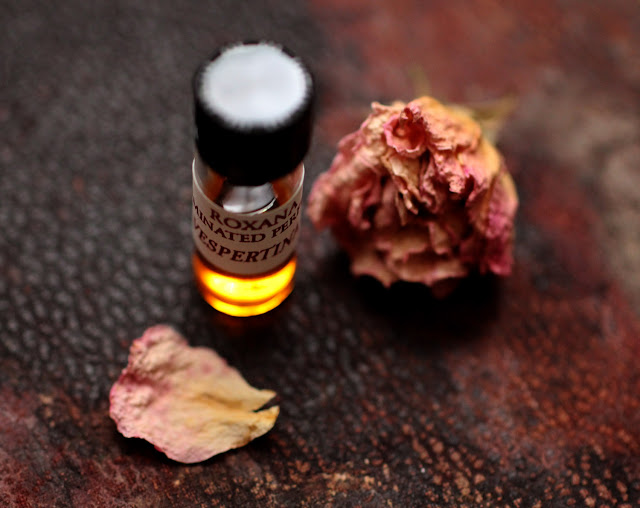 Vespertina is a floral perfume with a progressive evolution moving from its spicy citrus top notes into the strong floral heart immediately. The dry down varies depending on skin chemistry. In some cases the vestiges of the evolution remain a floral hum, while on others the scent transcends into incense with wood or a wood and leather. Many perceive the fragrance as containing orange blossom although there is actually none in the formula. At the Comic Con where this perfume debuted, I witnessed with complete fascination the aromatic scope of this perfume and its process of molecular disbursement on varying skin types. It was perfect within the context of the character Vespertina and her adventure. I suggest taking a scent journey while listening to the music.
Vespertina Botanical Perfume ingredients include: Cambodian Oud, Vintage Mysore Sandalwood, Indian Attars, Chords of Amber and Wood, Rose, Jasmine, Lotus, Citrus, Spice, Black and Pink Peppercorn.