"To create one's own world in any of the arts takes courage."
~ Georgia O'Keeffe


Having spent a full day at the Frazetta Museum and visiting the property up on Mystic Mountain the following day we drove into New York City. We entered downtown Manhattan via the Holland Tunnel. Immediately I felt the energy of the place and my mind was flooded with memories of living in the metropolis. After parking the car and checking into the hotel we walked over to 6th Street in search of Indian food. Both Greg and I fell into the grove of the city instantly, as if we were wired for the city genetically. Living in NY is a bit like learning to ride a bike. Once you’ve done it, it’s in your blood, the body automatically adapts to the frenetic pace. 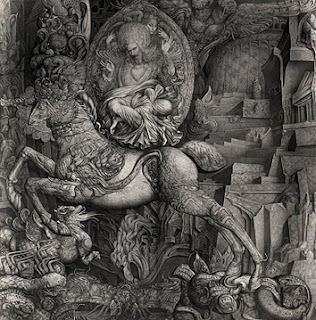 On day one, we first visited fellow visionary artist Alex Grey. Alex, like De Es Schwertberger, Robert Venosa and our professor Philip Rubinov Jacobson these are part of the visionary tribe of artists influenced by the fantastical and visionary Ernst Fuchs. Alex has a space in Chelsea on 27th Street which is home to COSM, The Chapel of Sacred Mirrors, as well as his publishing headquarters, studio and event space.

COSM is a fantastical gallery divided in two rooms. On the right is a display of several large scale vertical paintings depicting the evolution of the human being, from dense physical form to the ethereal spiritual realm. To the left is more like a gallery space showcasing the work of Alex through out the years including his best known images, like the one above, delving into the multi dimensions of reality.

In the summer of 2003 Greg and I attended the "Old Master, New Visions Painting Seminar" taught by Philip Rubinov Jacobson. We had come across a book of Robert Venosa at the Comic Con, and through a series of web searches encountered Philip and his course. Both Greg and I have been huge fans of Ernst Fuchs and the other artists that made up the Vienna School of Fantastic Realism. Traveling to Austria to learn the secrets of the mische (mixed) technique and the history of Visionary Art was profound. It connected me to my "Tribe" and also showed me the connection between visual and aromatic art making.