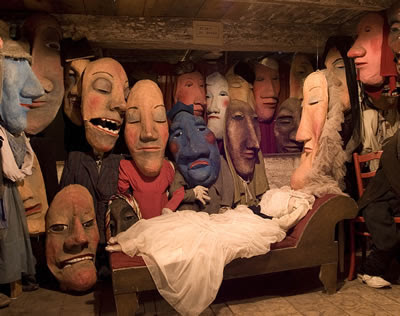 During a holiday party on a chilly Topanga night in December, we heard a fantastic story. Steven told us about a car trip he took to visit Santa Claus with his two young daughters. The youngest had asked "Daddy, does Santa really exist?" Steven answered, "Of course he does, he lives in the Northeast Kingdom." Steven is a sculptor, in his younger days he had worked with the artist Peter Schumann, founder of Bread and Puppet. He drove his wife and two daughters across country, up to Canada and down to Vermont to visit Peter. The car trip was filled with anticipation, compounded by the scenery which became more and more fairy tale like as they approached the predetermined destination. They traversed lush green hills and eventually arrived. Spotting a large barn, the family decided to explore. They entered and encountered an enormous, magical space filled with giant puppets. The girls were enchanted. This was followed by meeting several of the colorful apprentices that worked with Peter. Eventually Peter appeared, complete with a long white beard, suspenders and big rubber boots. He greeted the family with rosy cheeks, a twinkle in his eyes and invited them to stay and work. Work meaning...make bread and puppets.

Peters puppets were seen most recently in "Across the Universe" by the Visionary Director Julie Taymor. While Julie was in her teens she worked at Bread and Puppet.

Julie on Charlie's Greenroom
Across the Universe website
Posted by Illuminated Perfume at 12:41 AM