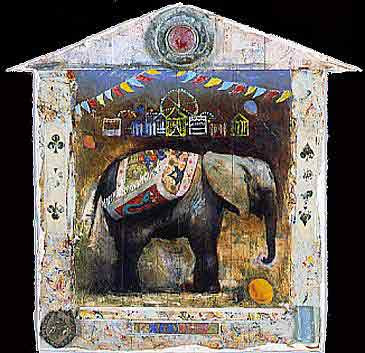 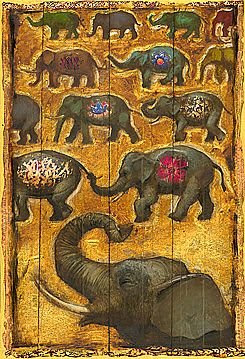 A friend and I were discussing the Universe of Perfume yesterday with it's various cast of characters from the kings, queens, knights, warriors, princes, wizards and elephants. Elephants? Yes, elephants.

Elephants are often referenced when something is obvious, but, no one talks about it because it is not appropriate or politically correct. There are quite a few elephants roaming the Kingdom of Perfume. Some are discovered right away, others take years to see and witness.

In the field of illustration when artists create a new piece, they make postcards and send them out to art directors. In this way the art directors can see the latest work by the artist. Sometimes artists will put the piece up on their website and send out a link. In the eighties when I lived in NYC and had my letterpress studio in Greenich Village I would create letterpress postcards and send them out to a select group of art directors. Within the Kingdom of Illustration this was all considered appropo. 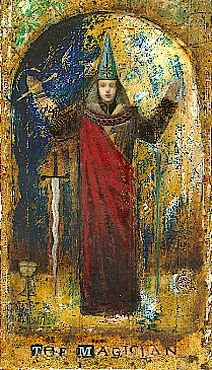 When a niche perfumer has a new product how do they get the smell of that product out? Sending samples is, in some circles considered unethical. Not to mention sending full bottles of the perfume. Some perfumers have contests or giveaways to get around the moral dilemma.
The challenge lies in that if no one experiences the scent and shares their perception, then how does the perfume have a chance? Time to access that inner magician.

One friend referred to bloggers as lobbyists, that's an fascinating perception. Read what Scentzilla wrote on her blog about this issue, it's pretty interesting.

The big conglomerates...even some of the "supposed" niche brands have an advantage with the ability to hire PR people and get into magazines and newspapers. If they are in shops, department stores or online venues many times the shop keeper will participate in the promotion. Even here you have yet another animal in the Kingdom, the media hogs.

The elephant that is causing me discomfort today is the deceptive advertising one. The one where someone will taut their product as "natural" for example, when the product contains elements that most would not consider natural. But, petroleum is natural they might say? How about the huge conglomerates that have a parcel of land in Grasse and refer to it in the

marketing. This way when they say there is REAL Rose or Jasmine in their perfumes they refer to their little plot of land. Never mind that the amount of essential oil produced by those plants would never be enough for the massive amounts of product they manufacture and distribute all over the world.

Let's call a spade a spade shall we? King of Spade, Queen of Spade or Jack of all Spades...no-no that's Jack of all Trades, oops.

E is for elephants but it is also for ethical...what exactly defines ethical behavior? After all, perception is an act of creation.

Posted by Illuminated Perfume at 12:23 PM