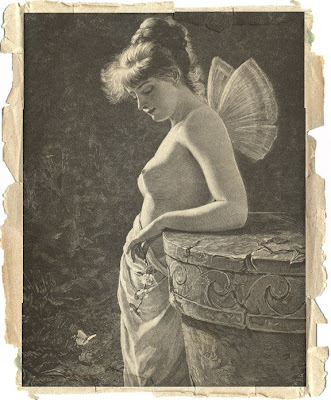 One scent that binds my mother, my daughter and myself is heavenly Neroli, essential oil of the flowers from the bitter orange tree Citrus aurantium var amara. Categorized as a floral and a top note, Neroli is one of the most beloved of all the raw materials in the perfumers palette. This treasure imparts fresh floral and citrus notes to a perfume when mindfully blended. In aromatherapy the scent is often used in formulas for both babies and new mothers due to it's gentle and uplifting properties.

Neroli is like a divine being from the fairy realm whose intoxicating fragrance arrives before her, soothing you like a lullaby into a euphoric dreamy trance. When she blossoms forth into this earthly manifestation she bestows yet more gifts of elixirs for the skin, healing massage oils and tonics for the respiratory system.

I chose Neroli because it was on both my mothers scent palette and my daughters. A scent palette is what I refer to when I construct a custom perfume for an individual. As a child, visiting Buenos Aires I was often spritzed with a traditional Eau de Cologne titled Colonia de Bebe. The main note in that cologne, as in classic cologne formulas, was Neroli.

Neroli was named after the Italian princess Anne-Marie de la Tremoille, the Countess of Nerola. She is responsible for introducing the scent to the fashion community of late 17th century Europe. 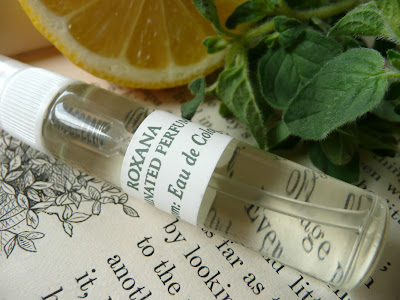 Unfortunately I do not possess a bottle of Colonia de Bebe, all I have are my memories of how much I adored the scent. In November 2005 I decided to create a traditional eau de Cologne which spurred on the Lavender perfume titled Vera. Last May I revisited the genre and formulated a light and fresh eau de Cologne that contains some of the same language of the beloved Colonia de Bebe. In fact when my mother inhaled it she exclaimed "Colonia de Bebe!"

The orange tree blesses us with several essences, they include orange essential oil from the pressed or steam distilled rinds of the fruit. Orange juice essence, a fairly new raw material that is derived from the distillation of the juice. Petitgrain, the distillation of the leaves and small twigs of the tree. When the waxy, white blossoms of the tree are water distilled the essence is referred to as Neroli, however, when an absolute is created it is deemed as Orange Blossom. 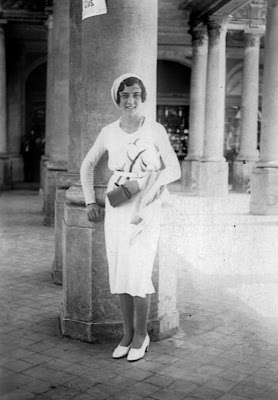 Thus Neroli, an essence derived from flowers with a rich history, feels like the one that weaves it's fragrant web from the oranges of Seville in Italy, to Colonia de Bebe in Argentina and the here and now of the orange groves of Los Angeles. Like these white flowers my mother, my daughter and myself are only here on this plane in physical form for a brief instance, yet let's hope that our lasting impression will be like the memory of Colonia de Bebe and linger on. With that line I leave you with a photo of my mothers mother Ani. The photograph is from 1931 in Mar del Plata, Argentina. Her memory is very much alive in me with olfactory delights from her apartment on Avenida Libertador in Buenos Aires, Argentina.

This journal post is written in tandem with three other mothers who happen to also have blogs. A part two of this post can be found here. Please follow these links to read their musings on "Mother and Kids, and the Scents that Bind Us." Beginning with Elena Vosnaki of Perfume Shrine, who birthed this idea followed by the Natural Perfumer Ayala Moriel at her Smelly Blog and Trish Vawter the author of the blog Scent Hive. Each of us is bonded by scent and by the common tribe we share, motherhood.

I think neroli would be on my scent palette too. It is one of my favorites and I love how it is such an integral part of your maternal line. I have heard of Colonia de Bebe but have never smelled it.

Maybe a trip to Argentina is in order? :-)

Thanks for writing such a lovely piece, the divine mother was clearly looking over you.

Thank you Trish1 I am just back from my outing in the woods and am off to read the other contributions...can't wait.

It is uncanny that neroli is featuring in Cologna de Bebe as it is exactly the smell which I loved to sprinkle the house with while expecting. It does relax and bring on happy thoughts!
I can well see how neroli has been the focal point between three generations of women and you bring this out wonderfully. Certainly your daughter knows how much you cherish her and that's the most precious treasure one can have with them.

Happy Mother's Day to you!

Roxana,
What a beautiful note that binds you three! Orange blossoms is one of my favourite floral notes. I love neroli (of course!) even though it does not well wear on my skin on its own. It wears better on me when paired with orange flower and orange flower water absolutes.

Great idea turning Vera into an EDC concentration, it must be beautiful in that formulation!

Hi Ayala,
So nice to be part of yet another fragrance adventure via the blog media with you.
Vera does not exist as a cologne, only perfume. Her creation was inspired by traditional cologne formulas.
Thanks for stopping by for a visit, happy travels to Paris!