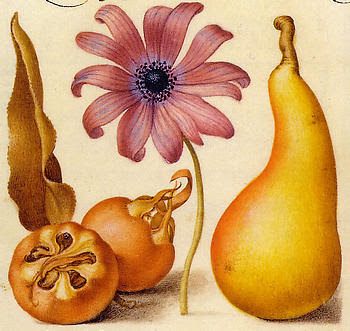 The large drafting table in the studio is most often used for formulating perfume but its history is as a place of painting and drawing. The table was purchased at Flax in New York City in the eighties when I was working as a freelance illustrator for magazines and newspapers. For over twenty years it was my primary dwelling. Even when Eve was a little infant, I would place her on my table on a blanket and paint while she slept.

As illustration work dried up and I slowly made the shift from telling visual stories to scented tales, the table became utilized more and more for the work of botanical perfume. At some point in 2008 I actually moved all my paints into Greg's studio to "clear the space" for my perfume work. 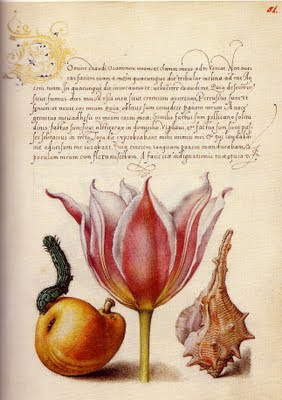 I used the word Illuminated for Roxana Illuminated Perfume for a variety of reasons. Primarily because I adore illuminated manuscripts and see the connections between the two ancient crafts. I also like that the word illuminate means to "light up" or "make lucid" which is what I am doing by working with these light filled, vital plants as my ingredients. As we enter this new phase of floral consciousness in our evolution it makes sense to be inhaling essences derived from the plants themselves.

Each botanical perfume has an illumination to go along with the fragrance, most have been created by my husband Greg Spalenka or we have done in collaboration. A few months ago I decided I wanted to create an image of a bee that had a feel of those glorious images in the Mira Calligraphiae Monumenta. 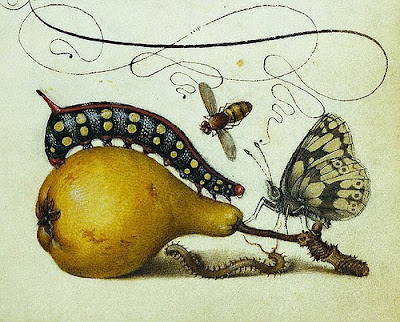 I thought I would do it in Photoshop, but, after discussing what i wanted to create with Ben, Greg and Eve it was decided I would paint it. Thus, I moved all the perfume materials off the drafting table, brought in my box of paints and the brushes from the shelves onto the table and am painting!

Feels really nice.
Posted by Illuminated Perfume at 12:00 AM

Beautiful. What a wonderful addition to bringing the mind to the present moment of peace. Thank you for this great gift and contribution Roxana.