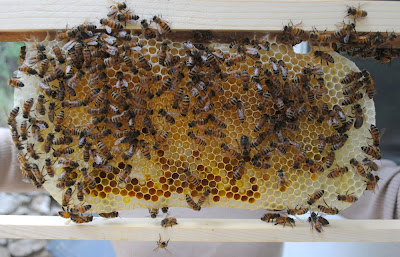 Yesterday we did our weekly hive check, eventually these will become less frequent. At the moment we are still in massive learning mode so we are eager to expand our vision, see what's happening and garner new insights. Off course there is that "not knowing what you don't know factor", which is always a drag. 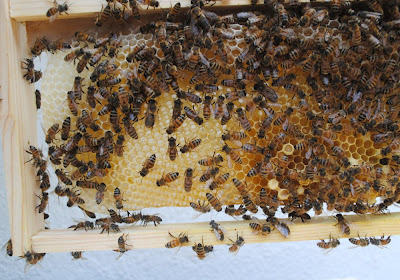 We saw her highness the Queen, pictured below with her assistance and a couple drones. The drones are the large bees you see, they have large eyes specifically geared for locating the Queen during mating runs. At this point they serve no purpose, unless something happens to the current Queen.

On Facebook there was some discussion that the Queen should have a name. Some of the names mentioned were Beatrice and Beelinda, I personally like Elizabeth. What do you think we should call her? 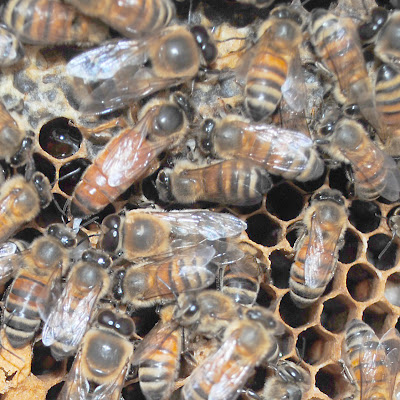 A Queen bee can lay upwards of two thousand eggs per day! Our Queenie appeared very productive when we saw her yesterday, Greg managed to get photos of her laying eggs. Look closely and you will see the little white egg emerging from behind her. 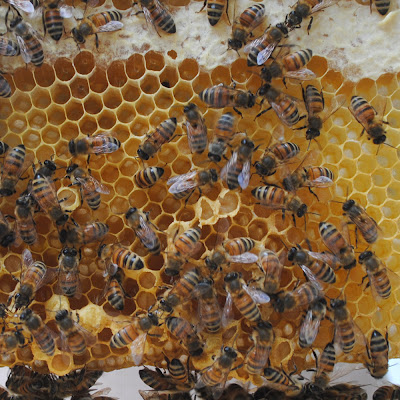 This photo above shows comb with capped honey above and brood cells in varying degrees. There is white larvae in some of them while others have already been capped. My daughter Eve is rather disgusted by the bee larvae while Greg and I see them as the future of a big healthy hive.

The image below shows some of the bee cells, we are concerned that the large peanut shaped one down toward the bottom might be a Queen cell. If it is, the second Queen is born than the two Queens would fight or one of them would leave the hive with half the colony
. 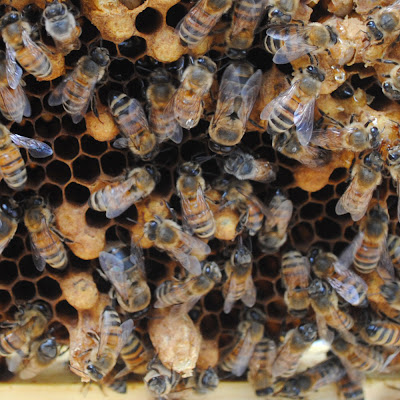 Posted by Illuminated Perfume at 12:40 PM

Elizabeth was a savvy and effective queen, to be sure, but Celtic Queen Boudicca (decidedly less famous, but a brave, powerful and capable leader nonetheless) strkes my fancy. Boudicca Bee. Has a nice ring to it, n'est-ce pas?