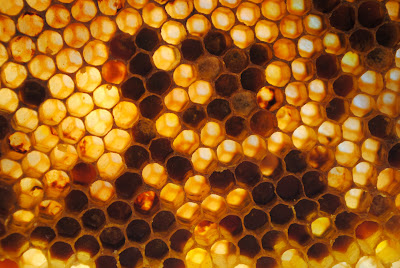 While lamenting the loss of our Birdhouse Bees my friend Jamie called to say that a swarm had appeared in her neighbors mailbox and could I come and get them. How auspicious we thought! Thus we organized all our supplies and treked out to Northridge, stopping at John Lyons to borrow his bee suit. We choose to arrive close to dust so that we could capture the swarm and bring them home immediately. 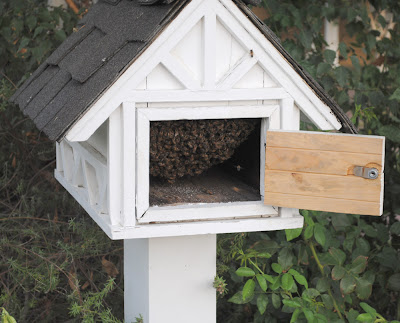 The white mailbox was shaped like a little house and had a pretty large swarm inside. Thanks to fellow BB member Michael who suggested we unscrew the top of the box, which is exactly what Greg did. After removing the very long bolt Greg took the box off and made a clean dump into the nuc box. Regrettably, due to the pitched roof, only a portion of the bees had gone into the box. Thus came the tedious task of scooping out all the bees into the box with the rest of their clan. 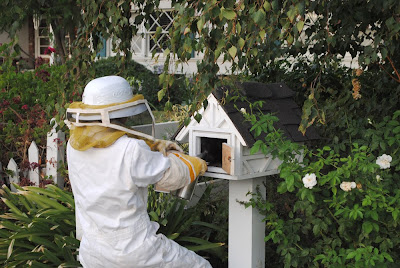 Once the the bees were in, we taped up the box and put it into the green laundry bag we still had from the Birdhouse Bee retrieval. At home we choose to move them into the hive box immediately as part of a seduction plan to get these girls to stay.

Meanwhile fellow BB member and pro Roberta offered us one of her Squirrel Box Bees. We figured best to have two swarms just in case something happens to one. Roberta caught us off guard by arriving with the Squirrel Box Bees late Monday night. The box had fallen out of a tree with all the bees, comb, brood and honey. Roberta had placed all the pieces into a big cardboard moving box and arrived here ready transfer to our second hive. Thus, at 10:30pm we all suited up, surveyed the scene and began the messy transfer. Roberta choose to leave her second Squirrel Box here to do a cut out and transfer over the weekend.

The following morning there was complete bee mayhem in the garden, hive wars were taking place at all three hives including an ant attack on the little Squirrel Box. YIKES! We took a deep breath, reduced the hive openings and hoped for the best. In the end the Mailbox Bees choose to leave and Squirrel Box bees #1 and #2 are doing just fine. It's still a bit of a mystery to us why Robber bees would have attacked the Mailbox Bees since there was no honey to steal. 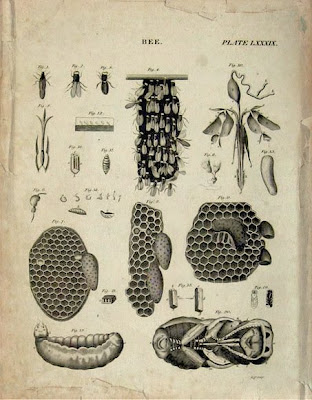 What the future holds one never really knows in BeeVille, adventure and learning is the only constant. I'm starting to view Bee keeping as a form of spiritual practice, has anyone written The Zen Guide to Feral Beekeeping?
Posted by Illuminated Perfume at 7:07 PM

I really must dig out the photos of the swarm we had on the side of our house years ago. A hive 10,000 strong were lodged in our attic and had to be transfered to a farm. I miss them! Not the stings and hundreds of bees in the house, but the *energy*.

MerMaiden, I know what you mean, I love standing in the midst of that energy, what a buzz!

WOW... what an affair !
I wonder where the mailbox bees took off to ?
Good luck with the squirrel box bees :)

This year I hived 3 swarms and only one of them stayed put, the other two were in new, unused boxs, so my guess is it didn't smell nice enough for them to stay.