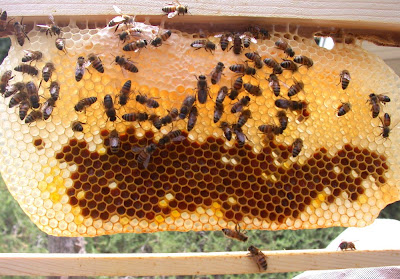 After returning from the San Diego Comic Con we decided to conduct a hive inspection. Our hope was that the bees would have multiplied considerably and we would be adding a third box to the existing two boxes. 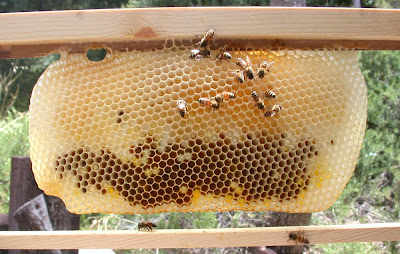 To our dismay the hive seemed to have shrunk considerably, no new comb and very little brood. Thus, with a sigh, we removed the empty frames from the lower box and gently placed the full frames in the top box back to the original lower box. After doing so we pondered what the problem might be...could it be the queen? If so, what do we do? The idea of having to kill our queen and replace her with a new queen seemed a little harsh. So we decided that we would add a queenless hive to the existing hive to see if that might get the "Birdhouse Bees" into a more productive framework.

In the meantime our Birdhouse Bees we attacked several times by large, dark "Robber" bees. Robber bees are honey bees from another hive looking to steal honey. We had noticed this happening to our hive on a regular basis since we set the girls up. What we didn't realize was that our hive had gotten so weak that they were on the verge of ruin.

Sure enough, Thursday another attack ensued. We put small cedar wood blocks in front of the entrance leaving only a small hole so that our girls could defend themselves easier. We also placed a damp clothe on the hanging from the top of the hive and down the front. I don't know why we were told this would help, we did it anyway. Greg even stood out there with a hose giving the big ugly robber bees a good wetting. Alas, nothing seemed to help. Through the afternoon, evening and next morning huge amounts of bees descended on our hive. By Friday afternoon all was quiet. Thus we did another hive inspection. To our dismay, our entire colony had been killed, raped and all honey stores were emptied. The photo below was taken one week before the attack, the honey stores are in the upper quadrant, capped with a white layer of wax. When the robber bees finally got in they opened up all the honey stores and emptied them, not even one little drop left.

This has all been a bit traumatic for us, we were told that the ants were the big problem, not other bees! In hindsight we should have replaced our queen, the colony is only as strong as its queen. Thus, we are cleaning everything up and getting the frames and boxes ready for another set...probably two new hives. With two, the loss of one isn't quite as depressing...at least according to other bee keepers. 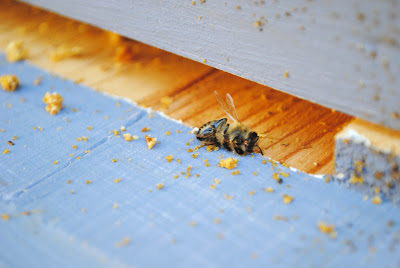 Photo above is how we found our hive after the attackers had left, the corpse of our girls were strewn about with golden beeswax from the opened honey stores lettered everywhere. Anyway, today is National Honey Bee Day! I'm intending you will vow to avoid pesticides today and forever, support the Organic food movement and your local beekeeper. Remember, as my bee mentor says, BACKWARDs is the new FORWARDs!

Just found this on my the backwards Beekeepers site, seems I am not the only one plagued with Robber bees....

Posted by Illuminated Perfume at 3:24 PM

Sending you smiles from Ottawa as you rebuild your hives.

Thanks for the info. What an education. More bees please! Keep us posted.

So sad. I commend you on your resolve to start anew. I would find that very difficult.

Hey friends, this has been very sad but also a good learning curve, albeit somewhat brutal on the heart strings. We are already in line for a new hive, stay tuned! Thanks for your love and support.