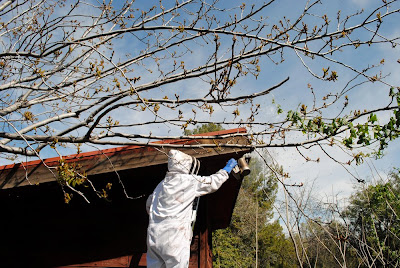 On Thursday, February 24th, Sherri in Woodland Hills called the Backwards Beekeepers hotline about a hive she had in her garage roof. Since this was in my neck of the woods I called Sherri and went over to inspect the situation. 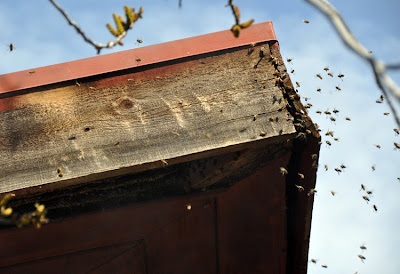 The bees were located in the corner of an old wooden garage/barn, which was approximately 14 feet in the air. We assumed the bees had made their hive under the boards. The job looked a bit out of my range so I asked, Maurice, one of the master mentors in the bee club to help out. Once Maurice had gotten the A-OK from the property owners we were ready to get the job done.

The Backwards Beekeeping team consisted of Kristi, Meghan, myself and our leader Maurice. Our mission: to cut out the combs, place them into a hive box and transport them to my home.

We were set to meet at the location on Monday at 10am. Meghan and I arrived on the scene first. As we walked around the garage Meghan pointed out that it appeared that there were two different hives. One at the corner as we had thought, with a second about five feet away. Shortly Maurice arrived on the scene and confirmed that he also suspected it was two hives.

The first task was to staple and tie string on each of the frames to hold the comb as it was cut out and get the site ready. As Meghan and Kristi diligently worked the frames, I cleared brush and Maurice set up the ladders and all his gear. 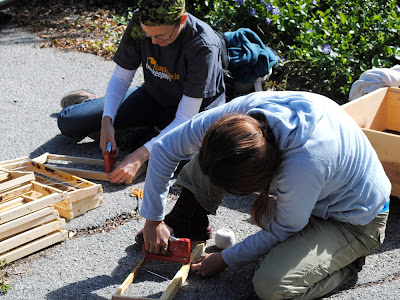 Kristi and Meghan preparing the frames with lightweight string to hold the cut comb. 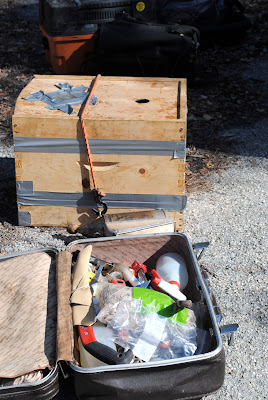 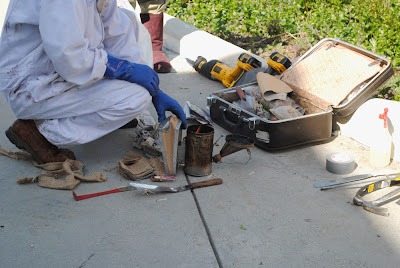 The master with his tools. 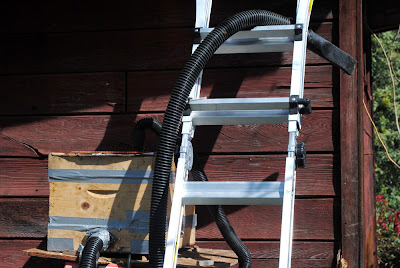 The "Bee Vac" set up.
Once everything was in place, all our suits were buttoned, velcro'd and taped, Maurice smoked
the bees. After waiting five minutes he began sawing and removing the boards revealing undulating rows of comb in different shades. Next, Maurice very gently began vacuuming up the large amounts of bees while we looked on in awe as massive amounts of bees bombarded the air space creating a very palatable frenzied energetic. 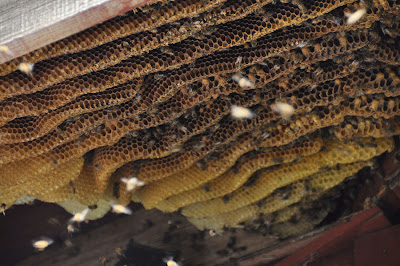 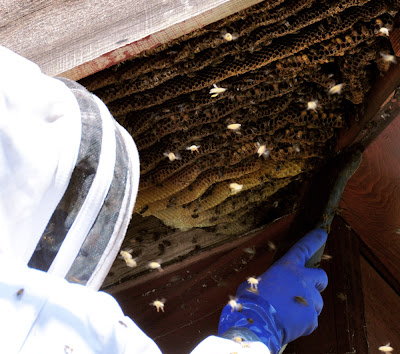 Maurice gently vacuuming up the bees
The next phase was the task of cutting the comb out, studying it and determining where it would go. The brood comb was handed to me which I them handed to Kristi who would cut and place it into the frames. Honey comb went into a bucket which Maurice had conveniently placed just under him. Comb with drone cells were tossed while other pieces were placed off to the side with use to be determined later. 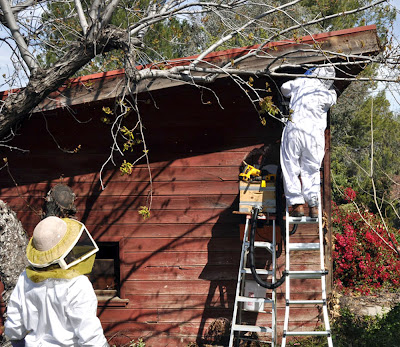 That's me in the foreground left corner with me new Bee suit. 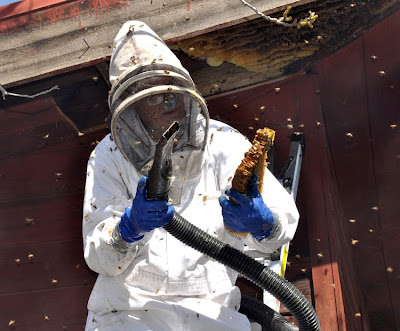 Maurice inspecting the comb before either tossing or handing it down. 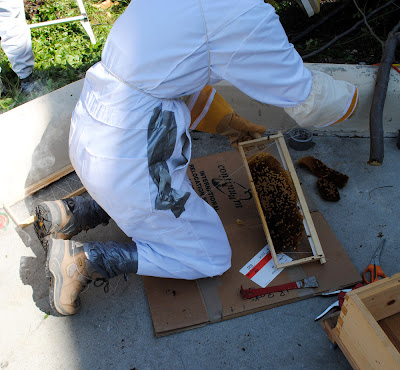 Kristi attaching cut comb to the frames. As you can see "duck tape" is a beekeepers best friend.
All this was taking place as bees attacked us from all angles and their agitated buzzing penetrating the core of our nervous systems. I've never been so happy to have my new bee suit. Later Maurice said that these were the meanest bees he'd ever encountered. Regrettably since our gloved hands covered with honey we were not able to take photos of the last segment of the process.

When all the comb had been cutout and placed into frames Maurice brought over the box with all the bees. Through the screened wire we sprayed the them with sugar water and then poured them into one of the hive boxes. To our amazement there were tens of thousands of honey bees, way too many for one box. Thus some were scooped out and placed into the second box. Eventually the second box was secured on the first, the top board put in place with two black straps wrapping around each side of the boxes.

The base board had already been secured to the first hive box with screen covering the opening. Meanwhile the large white bucket of honey was divided amongst us. It took quite a long time to clean everything and depart. Maurice, as the incredible mentor that he is, followed me to my home just five minutes away to give pointers on where to put the hive.

Although I have assisted with three cutouts nothing compares to the magnitude of this one. These bees are mean, highly productive feral bees, which indicates they will have no problem with the local robber bees and likely survive anything that comes there way. It's taken us one year and eight different hives to finally get to this point. The lesson, persevere!

"Fall seven times, stand up eight."
~ Japanese Proverb
The following day Maurice returned with Kristi to cutout the second hive. Kristi will give you a full account of that in Red Barn Bee Rescue, Part 2, stay tuned.

I am really grateful for the existence and help supplied by the members of the Backwards Beekeepers. Maurice is passionate about the bees, professional, calm and contains a bounty of wisdom. He is an awesome mentor, I recommend everyone to help him out with a cutout and learn from one of the masters.

Photos by Kristi Daggett, Meghan Wall Murphy and Roxana Villa.
Posted by Illuminated Perfume at 11:30 AM

wow - so incredible Roxana! the honey combs are so beautiful to look at - glad you had a new bee suit too!

Hey Marla, yea, this was an incredible experience and man, that comb is art!

really fascinating stuff, Roxana. thanks for sharing all of this!

Roxana - How incredible!!! The pictures of the undulating honey comb are just amazing! I love picturing their process, these buzzing encaustic artists! xoKandice

My goodness - I had no idea how beautiful it would be! I would be freaking out but I almost wish I was there. Maybe I could have been inside watching from the window :)

this is so fascinating and so, so beautiful Roxana!