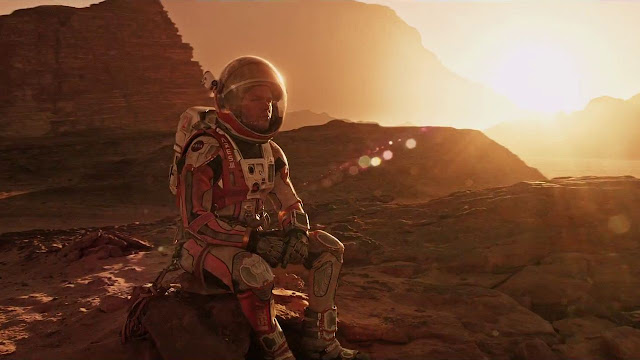 Last night we met friends at Cafe Carolina for a delicious meal of gnocchi and filet of sole braised with crushed tomatoes, black olives, capers, garlic, and basil followed by a coconut and cashew torte for dessert. After enjoying a very satisfying meal and catching up on all our various adventures we headed further east to the 8:55pm showing of The Martian at the Arclight Cinema. My draw to the film was Matt Damon, I've adored him as an actor since GoodWill Hunting and The Bourne Identity. 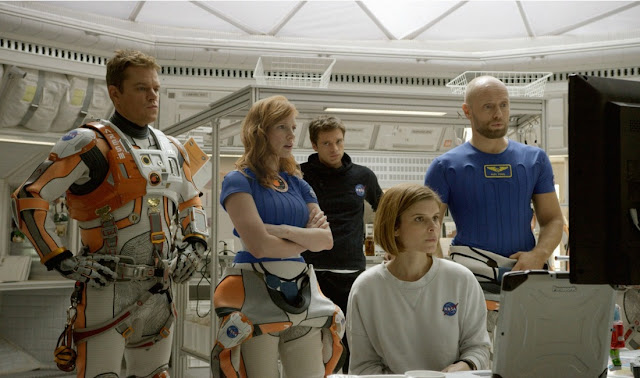 The Martian is an intimate yet epic, outer space survival film set on Mars with themes of courage, tenacity and teamwork. The opening scene is set on the bleak landscape of the red planet with the astronauts gathering soil samples. Immediately one is struck by the awesome visuals coupled with warm, fun interplay between the crew members.


During the film Greg whispered to me, have you noticed the color scripting? I hadn't consciously noticed the shift in hues until he mentioned it, then I instantly became aware of the warm and dusty terrain with Matt Damon as Mark Watney versus the steely blue, grays on plant Earth and the Hermes space craft.

Based on Andy Weir’s fiction novel and with screenwriter Drew Goddard’s very geek-centric adaptation Ridley Scott once again manages to enthrall us with a heroic journey set on Mars. The character Mark Watley is a NASA botanist who is left behind by his fellow crew mates during a fierce sandstorm.

The botany piece and my feeling of being an astronaut each time I step into my bee suit had me even more invested in the thrilling adventure. Part of great story telling is when we can identify with characters. Don't we all want to be as courageous and savvy as Mark, work with a team of like minded people for something bigger than ourselves?

As you readers know, I am attracted to films that are crafted with beauty, content and leave you thinking. Add in some geekery with a courageous, inspiring character converts me to a fanatic! However, there were two items that left cold, the first is this obsession big industry has with its interest in colonizing other planets instead of focusing and fixing the problems they, the industrial complex, has created here on planet earth. I am not cool with going to a new planet and basically destroying it for wealth and profit. This film, along with Interstellar gave me a bit of that feeling which I find extremely uncomfortable and distressing.

The second item I found offensive was the statement after the long list of credits that stated something like this: This film created over 15,000 jobs. The part the was blatantly omitted from that sentence is the word overseas, not in the US. Clearly all big budget films create lots of jobs (!), how about keeping them in the US where people are in need of employment instead of farming them out so that the profit margins can be higher for movie execs? Hello!?!

What fragrances shall we associate with dystopic Mars? I've heard that space smells "metallic" which isn't something easily found in botanical perfume. Aldehydes, in essential oils like Lemongrass, fall into a metallic arena as well as some spices which in turn would tie into Mars nicely.