Allegory of the Four Elements 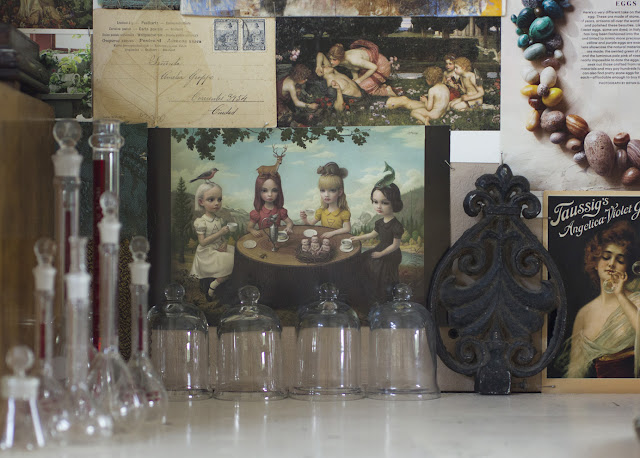 At the new perfumery in Santa Fe, New Mexico I recreated the sprawling boards I had in Agoura onto two boards, one vertical and one horizontal.

The arrival of my new glass distillation unit that I brought down from Kymia Arts in Taos had me moving things around in the lab which resulted in the reconfiguration of images on the horizontal board. One of my treasures, the promo for artist Mark Ryden's 2007 The Tree Show, had to be moved when a small type case and Greg's antique clock ended up blocking the piece. 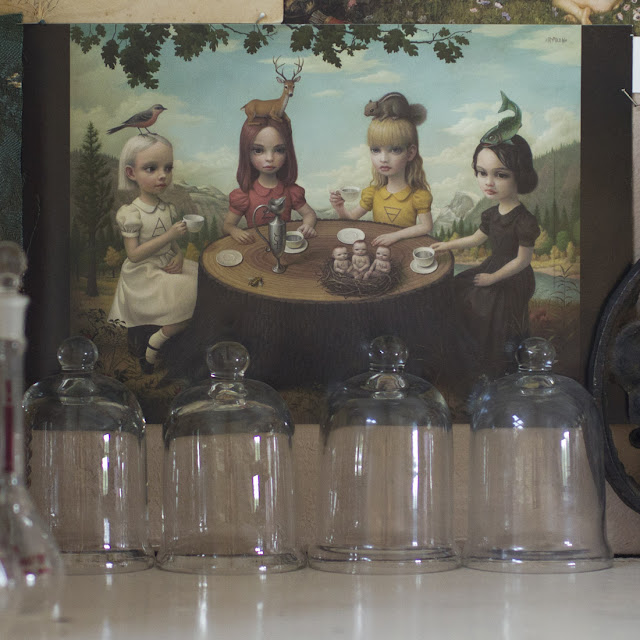 While carefully removing the pins from the piece I became curious of how he using using the alchemical symbolism. The painting is titled Allegory of the Four Elements. In the piece you see four young girls sitting at what appears to be a tea party on top of a tree stump, under an oak. Each girl has a different colored dress with one of the alchemical elements on the front as well as a related animal totem on top of their heads. What unites them are those large soulful eyes that Mark paints so well.

Some of the symbols are rather easy to interpret, although I have not discerned the story Mark is telling. The girls are drinking mercury, associated with spirit/the mind, why did he choose mercury? Is it because there are references to Mercury, also called Hermes, being the vital force, the hermaphrodite that is both masculine and feminine as well as neither—the great trickster?

I thought the three babies in the nest represented the three elements that compose the prima materia: mercury, salt and soul but then upon further observation with a magnifying glass, I saw that on their chests are the letters C, P and M. After some speculation I realized that they stood for cardinal, fixed and mutable, the modalities of the zodiac, also called quadruplicities.

While searching for information about the painting I came across a quote from Mark in reference to The Tree Show that I thought you, my dear readers, would appreciate:

“The show is about our relationship with nature,” Ryden explains over lunch. “There are many different parts to it, but you know, some people look at these massive trees and feel a sort of spiritual awe looking at them, and then other people just want to cut them up and sell them. It’s amazing how people can look with such different screens. Some see a tree as a commodity, an inanimate material to use for themselves, or even worse like it’s some kind of heroic thing to cut down this tree that’s taken 2,000, 3,000 years to grow. Like in the vintage photos of these lumberjacks, when they line up — it’s just mind-boggling how they do that. And it’s mind-boggling that it’s still going on today.”
Posted by Illuminated Perfume at 12:27 AM

This tree show really speaks to me. The vibrant awareness at the table, the divine feminine wisdom. Clearly it just spoke to you too, even in just moving around your studio items.

Meditating for the trees and with the trees -- thank you Mark Ryden. And Roxana!