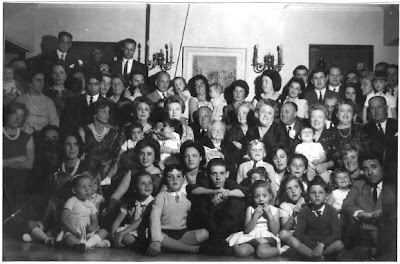 Yesterday, after posting the blog entry, my father sent me another photo from Leonildas birthday celebration. This one showcases all the “adult” attendees. Looks like it was a big party!

Also, in yesterdays post I wrote I would share the formula of the birthday solid perfume I set out to create. I think it was the quickest perfume I have ever orchestrated. I began with essences noted in the previous post, however, as I proceeded things shifted. Other essences spoke to me, some whispered, while others shouted.

The story unfolds with a small beaker filled with 11 grams of jojoba oil. Normally I use the unrefined jojoba, however, I am out of the lovely golden hued elixir, so the refined was used instead. To that I added my essences, I began with Labdanum. As I took all the different Labdanums and Jasmines out other essences beckoned. Recently I was given a small vial of Neroli, so a drop of that went in to compliment the Jasmine. When I had finished the composition I inhaled and applied some of the Jojoba blend on my skin. There was a wild, animalic note. Although I rather enjoyed the adventurous terrain the perfume had drifted to, it wasn’t quite the right fit for the day. So, I added Vanilla to smooth out the landscape a bit and a new Patchouli I have just received. I then reapplied and was contented, knowing that the aromatics would change even further once the beeswax was added.

The perfume is interesting and complex. When I took it out to share at the play, everyone responded to it quite enthusiastically. In fact, one of Eve’s friends stated, “OH! This is my favorite of all your perfumes!” For now we call it Birthday Balm:

11 grams of unrefined jojoba oil
2.2 grams of shaved beeswax
Approximately 44 drops total, not each, of the following 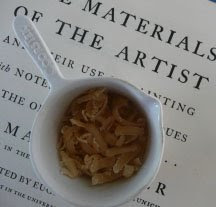 Normally I would have chosen to include some of my accords, but, since I knew I would be sharing the ingredients with you all, I decided to keep it simple. Perfume with a Vanilla base, Jasmine heart and citrus top notes are a good start for those starting out on their journey into the world of botanical perfume.

I wish I could make this balm. It smells wonderful!

My, perhaps I can make your wish come true. At the very least provide you with a sample to enjoy. I'll let you, and the other readers of this blog, know when those samples are ready. Thank you so much for sharing your thoughts and the enthusiasm for this new scent. I personally am addicted to it and slather myself regularly. it's aroma is perfect for the transition from summer to the autumn.

Oh! Somehow I missed this post when it went up, though I am here almost every day. Thanks so much for expanding the story of the party AND of the perfume, as well as for sharing your formula.

I moved about three years ago, and life has been such that I haven't touched the block of beeswax I had. Do you think it will still be good to use if I pull it out of it's (cool, dark) storage location?

I have not noticed beeswax going off.
I'll bet that it is just fine and in perfect shape to be used for some solid perfume making.

Please check back and let us know how it went.