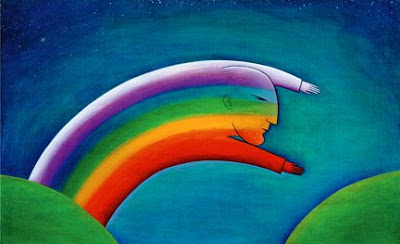 "Perception is an act of creation."

After a few minutes our focus shifted to Proposition 8, or Prop Hate as we started calling it. This is the Proposition that wants to ban marriage between gay couples. Remember way back when a black and a white couldn't get married here in America (the land of the free), well, this 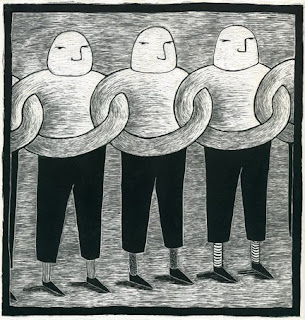 is the new version of that. The surreal thing is that it passed, in California of all places. I find this very disturbing, even though we have scored a huge victory with Obama, there is still much work to be done.

During art school days at Otis, one of my buddies introduced me to the magazine The Progressive. I remember looking through the artwork in awe and proclaiming my illustrations would one day be in there. Well, that materialized just after graduating. The art director at the time, Patrick JB Flynn, hired me to create an illustration to go along with an article on Unions. After that illustration I began contributing to The Progressive on a regular basis as well as The NY Times, LA Times, Washington Post and the Boston Globe. 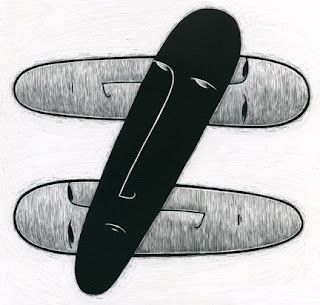 It was an inspiring time to be an artist. Now that the political tides have changed I feel some of that same sense of exhilaration.

There is a show of artwork done for The Progressive while Patrick JB Flynn was art director of the Magazine. There are some good essays and a schedule of where the exhibit is currently on view, here at the website.

Dear Roxana
Well, I guess the mere fact that you could VOTE on Prop 8 is proof that things are evolving. Next time it will be the other way round no vote on whether to ban marriage , but a vote on whether to allow marriage. And it will go through in 2030. or so. Things need time. And time is what we all have for free. Hugs to you and Greg and your daughter. I love spazes

Andy,
You are so wise and funny, can you come back to LA so that I can give you another hug? I'm sure the W-factor wont mind....he can have one too.
I was thinking 2030+ as well...it took about that much time for the barriers to come down between blacks and whites here in America.

I know the Progressive fairly well...I am glad this exhibit has been conceived & curated...made all the more interesting now that there is this Roxana connection! I love how the circles of life continue to find intersections & overlap as time goes on. Congratulations on your inclusion in the exhibit.