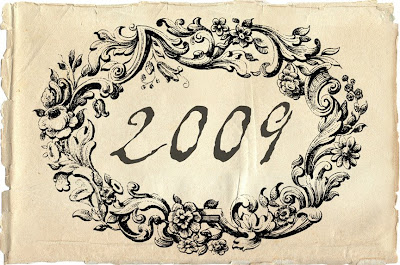 For last year's words belong to last year's language
And next year's words await another voice.
And to make an end is to make a beginning.
~T.S. Eliot, "Little Gidding"
Yet another new year of the Julian-Gregorian calendar. Our friends at the Pantone Color System have deemed “Mimosa", a bright yellow hue, as the official color for 2009. I like the name, as it is one of the perfume materials in the botanical and natural perfumers palette. Mimosa, an Acacia from India, exists in the form of an absolute for the perfume artist. Mimosa has a sheer quality which can easily get buried if not blended mindfully. The fragrance of Mimosa Absolute contains honeyed melon floral notes. There is another Acacia, Acacia farnesiana, termed Cassie which is quite lovely as well with a warm floral note that works well with wood, other florals and citrus. Mimosa is associated with protection, purification and dreaming. The dreaming aspect works nicely in terms of this being a Visionary year.

In the aromatic sphere the color yellow is attributed to citrus notes. Read more about aromatics and color by following the link below.

Last year the numerology of 2+0+0+8 = 10 translated to a number 1 year. One represents new beginnings and initiative. A great time for pioneering and putting forth new ideas. In America we elected a new President in 08 while here at the Villa Spalenka Maestro Gregorio and I dashed up to Topanga State Park and got married. More on that later, here is a little picture from our secret ceremony on Saturn Day, December 27th, under the auspicious energetics of a New Moon. 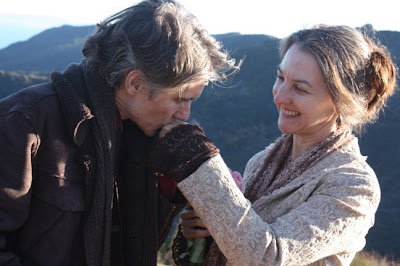 Numerologically 2+0+0+9 = 11 which translates to the maser number 11 and condenses down to a 2 year. Eleven is considered one of the Master Spiritual numbers, we have not experienced an eleven year on our planet since 1910! As a Master number, eleven carries a high vibrational energetic blueprint of great visionary strides. Assuming we don’t get caught up in fear, but, ya all know what the letters of fear stand for right? “False Expectations Appearing Real”,
so lets stay in the moment and in love.
I’ve posted a link below to some really terrific information on this 2009 Master Eleven Year.

For this Mastery Year, I intend to continue facilitating greater awareness of the value of our plant kingdom, utilizing my skills as a visual and aromatic artist.

Image one, Engraving on parchment, image two...Gregory and Roxana in Topanga State Park, courtesy of Peleg Top.
Posted by Illuminated Perfume at 6:00 AM

Dear Roxy, what a beautiful picture! Romantic...it looks like a photo from a catalog.
Mimosas.....I love them, we have acacias here blossoming in such a splendor...bright yellow gold...amazing!

hello lovely,
yes indeed...it was a very romantic moment and day. i get really happy when i see the picture.
:-)
more to come soon.

will you be posting pictures of the mimosa trees blooming in brazil? i'd love to witness the splendor.

Congratulations, Rox! How romantic, running to the top of a mountain on a new moon ~ and the picture speaks a thousand words, of course.

Der Rox, Thanks for sharing your joy..the culmination of a perfect union. To you both, dear friends, your gifts of love are most appreciated. Faith

Justine,
We started the ceremony in an oak groove and then moved on to the top of the mountain. A definitive moment in 2008 fer sure.
Thank you for your contributing your lovely thoughts.

I've just discovered your lovely blog. Thank you! Heres to a wonderful 2009.

Roxana,
The picture is beautiful, but especially because of the beautiful countenances. Thank you for sharing your joy...and congratulations on such a meaningful commitment.

Happy and charmed marriage full of joy and peace...

Hi Mary,
Welcome to Illuminated Perfume, a pleasure to have a new reader. Wishing you a very happy 2009!

Thank you for your good wishes Shelley, much appreciated. More pictures with details to follow soon.

Dear Roxana (and Greg)
What a lovely picture, reminding me in Medieval Times, the Middle Ages courtship and "Minnedienst".
I wish you two a 2009 full of energy and love.

Of course you would see the "Minnedienst" correlation Andy! If we have our way we will have a party that resembles a Renaissance Faire and the painting Spring by Sir Lawrence Alma-Tadema.
Thank you for your best wishes.

Belated congratulations on your union... joy, love and harmony to you both!

Thank you Adiane!
Joy, love and harmony to you as well.