A Garam Masala Accord 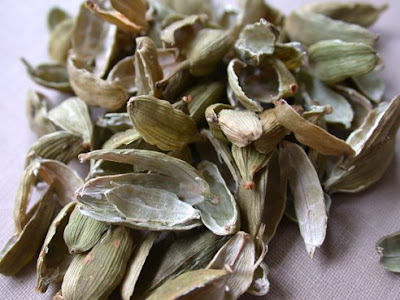 Sunday we planned to go over to a friends to celebrate her birthday and also watch the Oscars. Although we have a TV, we are not plugged into any bad news networks. Instead we download our favorite shows like LOST and Fringe and head on over to friends house when something special beckons us. 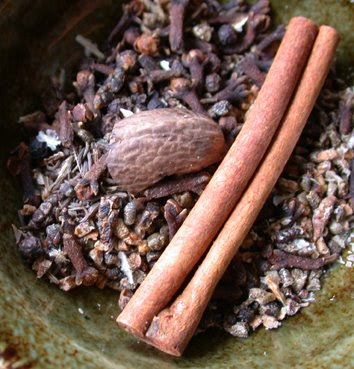 We decided to bring over an Indian inspired feast for the dinner, which included Green Peas in a Creamy Sauce. I've been making these pas for years. It is out of the book Quick & Easy Indian cooking by Madhur Jaffrey's. I picked it up years ago at World Market.

I began the homemade version by gently opening up green cardamom pods and gently scooping out the seeds. A similar process is utilized for making Vanilla tinctures and infusions. Once I had meticulously scraped out the required amount of aromatic Cardamon seeds, I placed the seeds, a Cinnamon stick, a piece of Nutmeg, Black Peppercorns, Black Cumin Seeds and whole Cloves into my coffee grinder to make a fine powder.

The result was spectacular with a beautiful fragrance which was blending rather nicely with the chocolate brownies that Eve was preparing. It got me thinking about the spiced hot chocolate that the Aztecs & Mayan would prepare. Thus, I am going to work on a natural/botanical perfume inspired by this. The first step will be in creating a Garam Masala accord utilizing the exact ingredients from above but in the form of essential oils.
Posted by Illuminated Perfume at 7:00 AM