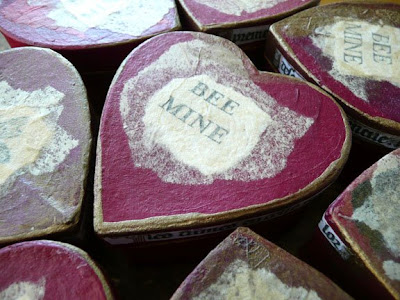 We love various writers for different reasons, for example I adore Phillip Pullman and Virginia Woolf as well as Patrick Suskind. Diversely different writers, each brilliant. Same can be said for film...although here I can go from the Matrix to Orlando to Monty Python.

Writers and critiques of perfume are quite varied as well, the luminaries have distinct voices and sometimes tastes. One of my all time favorite fragrance writers is Tom Pease over at Perfume Smellin' Things. I think it's his strong sense of wit blended with a heavy dose of real authenticity that attracts so many readers to him, me included.

With extreme pride I invite you to journey on over to the Perfume Smellin' Things blog where you can savor some of Tom's wit directed toward a Valentine I sent him. Yes indeed, he is one of the few that received one of the handmade Valentines I mentioned in a previous post.

Again, it was one of those "zone" things that hit one me one day and had me scrambling to create Valentines within a few days. The idea came to me while talking with Greg is the studio. I had asked him a question and then saw in the corner of my gaze the answer. This then morphed into a quick and dirty heart felt and hand made Valentine bonanza.

As an editorial illustrator I would create special images for specific holidays, go to Greenwich Village where I had my letterpress studio and print up special promos for my favorite art directors. I've been holding the intention of doing something similar with perfume. This mailing was a little step in that direction, although on a smaller scale to a very select group of individuals. 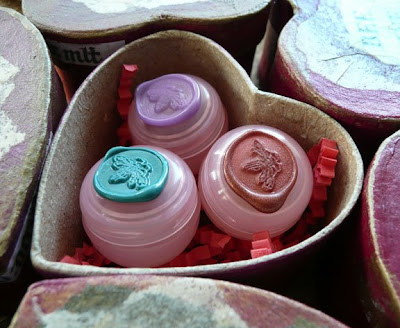 I decorated twelve little cardboard heart shaped boxes with paper and paint. There are currently five solid perfumes in my line: Lyra, Sierra, Aurora, Cimbalom and Chaparral®. Sometimes randomly, sometimes mindfully I placed three solid minis into each little box along with some festive shredded red paper. All were sent out with extra doses of love and appreciation to each recipient. Tom, ever so heartfelt, decided to use his as a giveaway over at Perfume Smellin' Things. Thus...head on over and leave a comment to be entered in the draw.

If you don't win, get your own set at the Illuminated Perfumery at Etsy.

Goodnight and Goodluck!
Posted by Illuminated Perfume at 10:14 PM

Sweetpea-
I just saw, read, and enjoyed his review of your work...

I hope my enthusiasm makes you blush !

Such magnificent work you do.
And I ADORE that you, your life, your passions, your work-
Are ALL of a PIECE.

Chaya, welcome to the Illuminated Perfume Journal. How grand to have one of the Goddesses of perfume come and visit. I feel blessed!

Thank you also for your inspired contribution over at Perfume Smellin' Things. What a peach you are. Like Tom, you are quite a word smith yourself.

Big smooches and hugs to you my love.