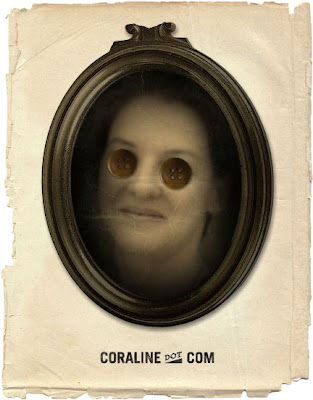 As an illustration major in art school one of our projects in Larry Carroll's illustration class was to illustrate a phobia. (Larry now goes by Lawrence.) I had never heard that there was a button phobia, I don't think that was on our list, probably because it is so rare. Thus, Koumpouno Phobia is the fear of button...as explained by Neil Gaiman in the video below.

I created a Coraline treasury today for the Etsy main treasury. It is titled Koumpounophobia.
The film felt very Etsy to me from the start with the doll making sequence to the fact the film has been created by hand using stop animation. A truly handmade and heartfelt art collaboration. This is from the Coraline website:

"You are about to enter a world where everything you see has been created by hand."
A couple years ago we had the fortune to visit Laika in Portland where Greg was being interviewed for a project. We were taken on a tour of the studio and got to see many where all the stop animation took place with all the drawers of items.

The film is really terrific and I highly recommend it, however, it may be a bit too frightening for small children. The FilmFocus website has some fun games associated with Coraline, that's where I created the portrait of me above. Here is a video clip of Neil Gaiman, the author of the book, speaking on buttons.

Now, back to the Koumpounophobia treasury. It began with the seed of an idea which too germination at the start of the film. However, when I began to hunt for items to place in the treasury things got convaluted. I ended up sacrificing content for beauty. 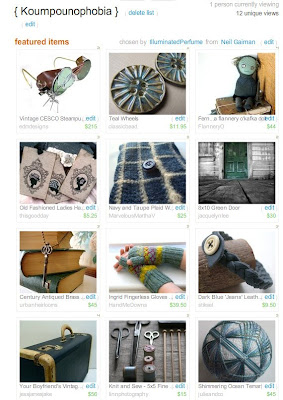 The featured Etsy sellers are, beginning in the top right corner and moving to the right:
EdmDesigns in New York City created the Vintage Steampunk Glasses
The porcelain Teal Wheel Buttons are by Classic Bead in the Ozarks.
The Fern...a Flannery O'Kafka Doll is made in Scotland by FlanneryO
This Good Day aka "Willy Nilly Art & Whimsy" created the Victorian Gift Tags
Marvelous Martha V, which by the way is my mothers name, created the Plaid Wool Clutch
The photo of the Green Door is by Jacquelyn Lee in Colorado
The Vintage Skeleton Key is from Urban Heirlooms in New Jersey
The Fingerless Gloves are by Hand Me Downs in Boston
The Vintage Trunk is from the shop JessJamesJake in Albany, New York
Linn Photography in the UK did the Fine Art Print titled Knit and Sew
The Shimmering Ocean Temari is by Julie and Co. in Michigan

Cheers to each of these Etsy shops featuring handmade and vintage items. Let's all intend this treasury makes it to the Front Page (FP) of Etsy.

By the way, Etsy was featured on NPR today.
Posted by Illuminated Perfume at 10:36 AM

lovely treasury ~ all the items go together beautifully! i've been wanting to see coraline too, must do soon. thank you for featuring my print, i appreciate it. Linn xx

Caroline! You know that's Coralines "other" name. How synchronistic. A pleasure to feature you. Thanks for dropping in.