"Youngthes folke now flocke in everywhere
To gather May buskets and smelling Brere;
And home they hasten the postes to dight,
And all the kirk pillours eare day-light,
With Hawthorne buds and sweet Eglantine."
~ Spenser 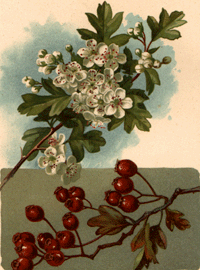 We now find ourselves in the sixth moon cycle of the Celtic Tree Alphabet. From now until June 9 the benevolence of the Hawthorne, also known as Whitehorn, bestows us with wisdom and protection. This mighty evergreen has been utilized extensively as a protective hedge plant due to its thorns and is part of the Rose family. The small, rosy apple-like fruit, or berry, is utilized in medicinal preparations as a cardiac tonic.

Like most of the trees in the Ogham calendar, Hawthorne is native to Europe as well as Africa and Asia. The species prevalent in the time of the Celts was the Cratcegus oxyacantha. The animal totem associated with the Hawthorne is the crow. The Hawthorne is one of the three triads of trees, along with Oak and Ash. It is said that the Hawthorne tree may provide a portal to the realm of the Fae and has this sentence equated with her; "Her power is to open what is shut; to shut what is open." Be mindful, the fey folk do not wish you to cut the flowers of this sacred tree.

"The fair maid, who on the first of May,
Goes to the fields at the break of day,
And bathes in the dew from the hawthorn tree,
Will ever strong and handsome be"
~ A Beltane chant

Teachings of this May blooming tree, represented by the letter "H" for Huath, center on cleansing, protection and defense. Emblematic of hope, fertility, protection and peace. During this month consider creating protective charms, amulets or bouquets with the bundles of the thorns or leaves. Make sure that it is of the pleasant smelling variety, some species give off a rotting corpse-like stench once cut. I use the dried leaves and find there is no ill odor.

As we conduct Spring cleaning in our homes and gardens now is the time to evoke the Hawthorne to facilitate clearing out our inner cobwebs with her powerful magic. Use the leaves of Hawthorne if you are interested in creating a "flying ointment"; a magical salve intended to open the doorways of perception. Here is a recipe to create your own infusion. Once you have an infusion you can use that as your "flying ointment" or take it a step further and use the infusion as the base oil in a solid perfume.

There is a dualistic aspect to this tree which manifests itself in various interpretations. The glorious blossoms that present themselves just in time for Beltane celebrations, are found amidst thorns. Symbolically seen as containing yin and yang aspects, this is where the concept of balance enters. We are asked to accept this dualistic Earthly realm we reside in by embracing the union of opposites within each of us.

"Do I contradict myself?
Very well, then, I contradict myself.
I am large, I contain multitudes."
~ Walt Whitman, Song of Myself
I am tincturing Hawthorne for the perfume Greenwitch. Thus, the Scent of this day shall be the botanical perfume devoted to the White Lady known as GreenWtich.

Culinary and Medicinal Uses from the GardenGuides website:
Both ancient and modern herbalists have successfully used hawthorn for its food and health benefits. Modern science shows that hawthorne contains chemical components which are sedative, anti-spasmodic and diuretic. If you intend to use it for medicinal purposes, look for C. laevigata, C. monogyna, or C. pinnatifida, as these hybrids are known best for their medicinal uses. Read how to make a tincture or an infusion using hawthorne flowers or berries.

The hawthorne berry is one of the best cardiac tonics available, and is often used to treat high blood pressure.

Hawthorne berries, dried and crushed and made into a decoction, eases diarrhea and dysentery, kidney inflammations and disorders. See Cautions.

The young hawthorne leaves can be used as a safe, and non-nicotine tobacco substitute for those who desire to quite smoking. Enhance the flavor and help heal the throat by adding yarrow, mint, coltsfoot or mullein.

Chewing the hawthorne leaf has been known for centuries as a safe way to give nourishment, revive energy, and a feeling of well-being. That is why it can be used to treat those who have problems with apprehension, insomnia and despondency. Chewing hawthorne leaves takes away that "tummy grumble" when you"re hungry. That is why the hawthorne became known as the "bread and cheese" tree, giving as much sustenance as a plate of bread and cheese.

The hawthorne leaf-buds are good cooked (10 to 20 minutes) and have a similar taste to lima beans. They make a great addition to chilis and soups.

You can make jellies and fruit sauces from the berries, just make sure you strain the sauce. Hawthorne berries contain their own pectin so the sauce or jelly will thicken nicely.

Hawthorne flowers are edible and make an attractive addition to salads and other dishes.

Hawthorne seeds can be roasted and used in a manner similar to coffee.
Posted by Illuminated Perfume at 8:02 AM

This is totally fascinating! Thank you so much for posting it.

Cat, what a splendid message. I really appreciate you hopping over for a visit.

Thank you Roxana,
First, because you've reminded me of this beautiful tree possessing nice properties and calming the heart (I found it good for people who have difficulties expressing their emotions, keeping it in their heart and get heart problems because of it). So, it's a key-tree, opening or closing the doors... to the realms :o) How was it? "The Oak, The Ash and Thorn" - attracts Elves to your garden when planted together? :o)

And also thank you to remind me, that I have also another hobby besides perfumery and I neglected it a bit... tomorrow I'll open again my books on herbs :o)

Hi Max, how lovely that you dropped in for a visit. Thank you for sharing your thoughts about hawthorne, I like the way you put it;
"I found it good for people who have difficulties expressing their emotions, keeping it in their heart and get heart problems because of it"

I do not have one of those triads of Trees here, I believe you will find those most prevalent in England and Ireland. One day I will experience it for myself and I can let you know...unless I disappear into the world of the Fae.
:-)

Dear Roxana,
Sometimes I think you are already a half-fae :o)

Dear Roxana, How do you tell the mooncycli? Because I have found different opinions about what mooncyclus is it now. If I count the mooncylci beginning with the first New Moon after the Yule then I get the fifth cyclus now. And according to the Silver Circle (a Ducth Pagan organization) it's a Planting Moon (the seventh cyclus)... And according to you it's the sixth one :o) Confusing... Well, I understand there is no "absolute truth" in this matter and everyone finds her or his own way/truth... So, I am curious how do you count the moonscycli and why. Thanks in advance... :o)

Hi AromaX,
I use this guide for the Celtic Tree alphabet reference: Celtic tree mysteries By Steve Blamires. You can find the book online. If I was to use a moon planting guide" I would select one with an Anthroposphy source, because that is a system that really appeals to me. Indeed, there is a lot of contradictory information. I encourage using ones intuition to find the system that whispers to you on a soul level.