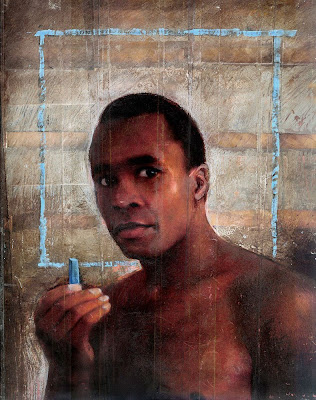 In the eighties my husband Greg spent time with Sugar Ray Leonard when he was in training for his second Duran fight. This was just after Greg had done the illustrative journalistic project on Tyson. The difference between the two people were extreme. Leonard was the consummate gentleman. Always calm, always in control. The article Greg created several pieces for was called, "The World According to Sugar Ray Leonard", and it was about his obsession with control.
Sugar Ray's ability to control helped him discipline his mind and body to fight and become a great champion, but it was control that was also threatening to destroy his family. Through therapy and other measures he was able to find a balance. Interesting, this reminds me a bit of Spock in the new Star Trek film directed by JJ Abrams.
Greg attempted to show symbolically with this portrait that Sugar Ray was "boxing himself in" with these emotional issues. The blue square he draws around himself represents the boxing ring but also his life. Greg took Polaroid pictures of him and the ring while he was on the assignment. Some of these pictures are collaged into the background.

This painting is part of a "Best Father's Day Gift" poll on the Etsy blog called the Storque. Please head on over and cast your vote so that this original painting! 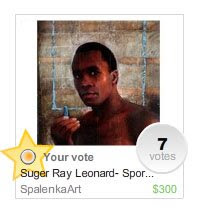 Here's how to vote:
1. Go to the Etsy main page here: http://www.etsy.com/
2. If you have an account, sign in by clicking the "sign in" button in the upper right corner.
3. If you don't have an account it's super simple to create one by clicking on the register button in the upper right corner.
4. Once you are signed in, go to this link and click on the little circle just under the photo on the left side. Then scroll down to the bottom of the page and click on the "cast your vote" button.
The photo may change places throughout the week. Intending it moves up to number one! Please help out.

Thank you so much!

The painting was created in 1996 and is ©Greg Spalenka It measures 11"x15" and was created using graphite, acrylic, oil paint, tape, collage, Polaroids, on illustration board. It is signed on back. Check it out on Greg's shop on Etsy: www.spalenkaart.etsy.com.
Posted by Illuminated Perfume at 12:01 PM