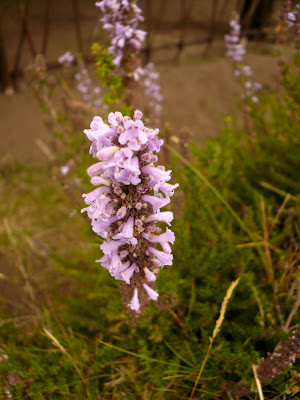 The sun, the moon and the stars would have disappeared long ago
... had they happened to be within the reach of predatory human hands.
~Havelock Ellis, The Dance of Life, 1923
The number nine in Hinduism is revered and considered divine because it denotes completion. Three times three equals nine. On the ninth day of our extra-ordinary adventure in Ecuador we we were awaiting Eduardo and Maria who were taking us to visit some ancient pyramids (Part One) and the renown marketplace at Otavalo (Part Two). Greg was looking forward to the pyramids while Eve and I were anxiously awaiting the treasures to be found at the Saturday market. Ivan, a fellow instructor at the University arrived first with his pretty sister.

Soon we were all assembled out front of the hotel and piled into the two small SUV's for our adventure. The North-east journey featured diversity as we left behind the city and entered in dry, arid mountainscapes. After a dusty and very bumpy ride we arrived at Cochasqui, a pre-Columbian and pre-Incan site of fifteen pyramids and twenty one burial tombs. Our guide was an elderly gentleman who was part of the original archaeological excavation of the site in the 1960's and seemed to have a deep connection to this sacred place. The pyramids are now covered by earth mounds with only a few segments visible to the eye. 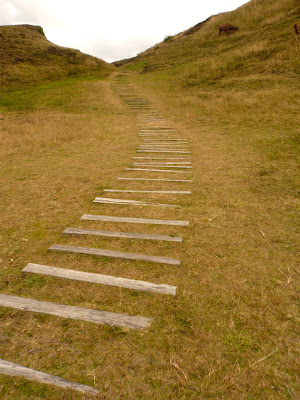 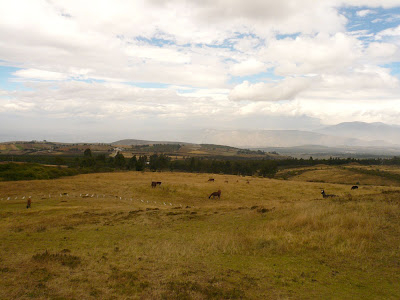 Controversy exists as to whether Cochasqui was a strategic military site, an astronomical center of observation, a ceremonial-ritual center or a home compound center for native elites. Most likely it may have been a bit of all of these. The ruins date back to 950AD with the Quitus Cara tribe. According to our guide the civilization was matriarchal. Indigenous people tell the story of a white woman by the name of Quilago, the White Warrior Woman, who led the Cara (Caranqui) Indians against attacks by Incan warriors. 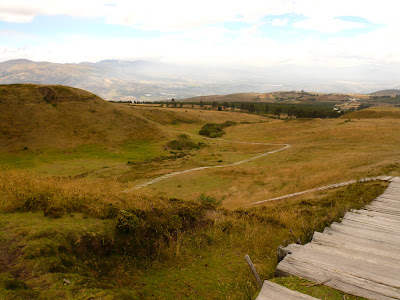 The site is located at the equator, a powerful point of energy, where every summer solstice shamans gather for Cochasqui Wilka Kuti. A ceremony more ancient than the pyramids themselves. 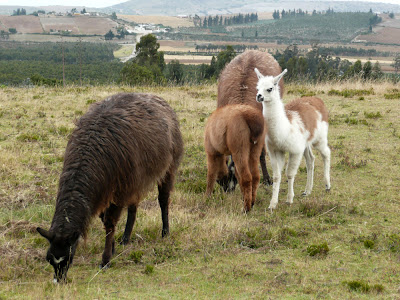 Llamas joined us as we walked with our guide to the first pyramid he selected to begin the formal discourse of our tour. The view of valley and far off volcanoes is breathtaking, although a bit disheartening to hear that at one time this dry arid land was a thriving rain forest. What's up with humans turning the rain forest into deserts, will we never learn? To make matters worse, non-native Eucalyptus trees have been planted. Although pretty in the landscape the Eucalyptus trees add to the drying of the land and make the soil un-hospitable to other plants, especially natives. 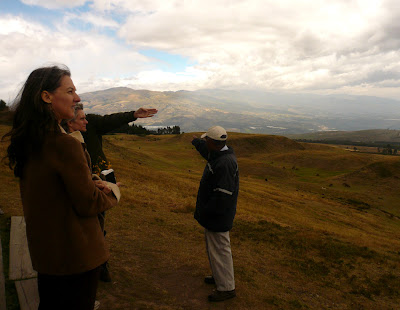 As mentioned above there are fifteen pyramids and twenty one burial tombs. One of the burial tombs contains over 500 skulls where another contains a full skeleton. One report claims that the skeleton was of a 6ft tall human.

Covered excavations sites show that the pyramids were stepped. The archaeological dig begun in the 60's barely scratched the surface of the history buried here in Cochasqui. Although the Ecuadorian government is not funding more excavation, perhaps a group of students from the UCLA archeology department will come and take on the task. 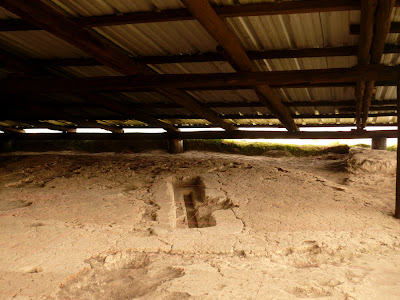 At the top of one pyramid are two observation sites that were utilized to track the stars using a huge sun dial. The sun dial originally was one solid piece, roughly 25 feet in diameter and one foot thick. The archaeologists have determined that this type of clay has to be cooked at 2300 degrees to set in one large piece as the one here at the site. Above you can see a photo of the excavated sun dial, a rectangular well for water was utilized as a reflecting pool. Just beyond the sun dial is a lunar dial. These dials were constructed in perfect alignment, like Stonehenge, for tracking the Summer Solstice and Winter Equinox. The area is covered to protect the water sensitive clay from erosion due to heavy rainfall. 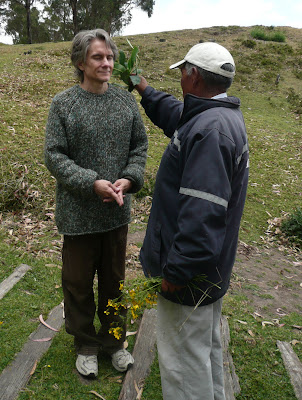 As we meandered toward the trail that would take us to the Museum, our guide decided that Greg needed a cleansing to clear some negative energy. Thus three different herbs were selected and Greg was swatted with these in sequence. In the end he was given a cluster of a yellow flowered herbs to place under his bed in the shape of a pyramid.

The energetics of the place is truly magnificent, an underlying peace and clarity was quite palatable to both Greg and I.

"There is a mystical aura to this place located high in a barren Andean plateau and directly under the equatorial path of the sun. This mysticism comes from the ancient history of a peoples whose past is represented in the form of the pyramids whose shapes eerily penetrate the collective conscious of the observer. In addition, the vast and unrelenting passage of time, is represented here by the surrounding and watchful Andes and the vegetation coverage of the pyramids. The pyramids hint at our own individual and cultural transience and the immortality of natural history, of which human history is just a part." ~ Quote from Pyramids of Ecuador

All the photos were taken by myslef and my daughter Eve ©RoxanaVilla.
Posted by Illuminated Perfume at 7:23 PM