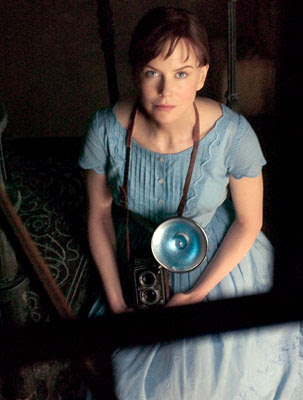 “The psychological rule says that when an inner situation is not made conscious, it happens outside as fate. That is to say, when the individual remains undivided and does not become conscious of his inner opposite, the world must perforce act out the conflict and be torn into opposing halves.” ~ Carl Jung

This concept is vividly portrayed in a film we watched last night titled Fur: An Imaginary Portrait of Diane Arbus. The first thing I learned is that Diane in this case is pronounced Dee Ann. Secondly, until seeing the film I knew very little of the artist because I'd never been attracted to her photos. Even now I find myself more interested in the artist and the woman than her work.

I found the film completely captivating. It is, as the title states "An Imagined Portrait" not a biopic piece. The decision to create the film in this way is quite fitting since her work is so surreal. Like the film Amelie by Jean-Pierre Jeunet the production design is rich and gorgeous. Scenes are breath taking in color, concept and imagery. In the HBO mini series on the film's DVD we learn that the production designer Amy Danger added layers of meaning to further boost the concept of an imagined portrait. I won't reveal that here so that you can discover it yourself.


The life and story of Diane Arbus is tragic like Virgina Woolf and Sylvia Plath. I guess my mind has a hard time comprehending why an individual with talent and success would be so utterly depressed as to sever their life cord. Nicole Kidman's portrayal of the sensitive and creative Diane is excellent. Kidman excels in representing tormented female artist's, like Virigia Woolf in The Hours.

Although the film represents the artist becoming conscious of their shadow and aligning themselves with their creative muse, in real life I don't think Diane ever managed to do this. Perhaps the surpression of the shadow was so intense as a child that it was never fully able to integrate itself into a reality.

As far as the critics who rail against the film, get a life! The title states this is an "imagined" portrait and as such it is a conceptual, vivid characterization of a period in a creative individuals life. Cheers to director Steven Shainberg and production designer Amy Danger for going out on the edge to portray an imagined vision of an artist by utilizing creativity to tell a story in a more surreal way like Diane does in her photography.
Posted by Illuminated Perfume at 4:04 PM