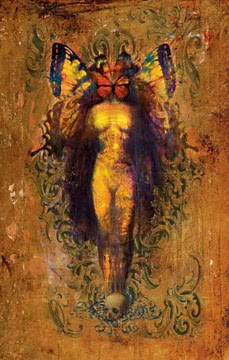 We are in one of the two transformative periods of the western seasonal wheel, Autumn, where leaves turn from green to glorious shades of yellow, orange, red and sometimes magenta. I'll never forget the first time I visited Vermont and witnessed the spectacle of Autumnal blaze of color. To me it felt surreal as I gazed on all that spectacular color and texture.

A few weeks ago, verging on a month now, Greg and I were at a party in the Hollywood Hills brewing with visionaries. There was also a psychic hidden away in the dining room where folk had lined up to get readings. I put my name on the list and waited patiently. Lately "Spider" had been manifesting big time in my dreams and my environment. I was curious to get a deeper insight as to what spider was intent on communicating to me. I figured this intuitive fellow would be able to provide a few answers. As people went in and out of the room I spotted a card set on the table with a lightening bolt. There was something about that card deck that called to me.

Finally it was my turn. I sat down and asked about the lightening bolt card set. He told me it was the Animal Medicine Cards. Ah, of course, my dear departed friend Jillian used these as well as the Shaman who I studied with. Perfect doorway into asking about spider. He told me that spider was about creating a sustainable income revenue source, like her web. Hmm, I liked that.

He then did some numerology with my name and birth dates, which indicated ARTISTY. He also told me to speak my truth and that I need to be heard, even if it makes people uncomfortable. Okay, that last one is a reoccurring theme that gets me in trouble. The lesson, in my humble opinion, is to communicate in a gentle but clear and concise manner. 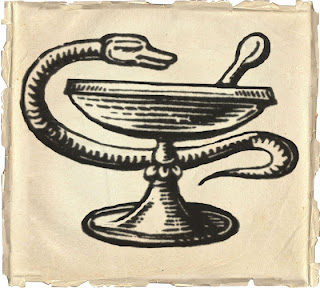 Next he had me choose three cards from the animal deck, one for the past, present and future. The card I choose for the present was snake. His interpretation was that snake symbolized a letting go, shedding off everything I know in order to birth anew. That sounded a bit scary, and exhilarating. Somewhere along this journey I've heard that fear and excitement are the same thing. “Fear is excitement without the breath.” according to the founder of Gestalt therapy Fritz Perls.

What aromatic embodies transformation? Snake oil? Snake oil as an essence for natural perfumery does not exist. The original snake oil came from China and was used as a liniment for the joints with primary notes of camphor and spice. In the nineties when I studied Aromatherapy I created a blend for transformation that I remember containing essential oils of Frankincense, Elemi, Grapefruit and Thyme. My little booklet "Aromatherapy for the Family" by Jan Kusmirek lists these essential oils as recommended for Change:
At the moment I am working on a cologne/room spray for this season of transfiguration. I'll reveal more shortly with photos. It has been in the works for quite a number of years and finely feels like the right time, especially amidst shifting realities.

Breathing in the deep transformative energetics as we step into Samhain and morphing into my highest, divine self. Please join me, the more the merrier.
Posted by Illuminated Perfume at 8:18 PM