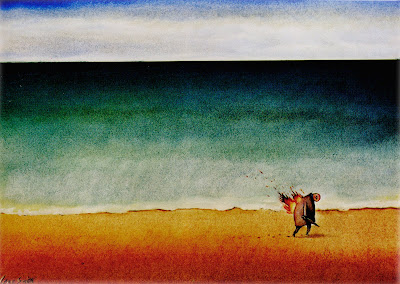 While in art school at Otis I fell head over heels for the work of an illustrator named Lane Smith. The specific piece is this one pictured above from the third American Illustration Annual that we were both in. This image was created using alkids and was part of his portfolio, although there was no title the description reads: Illustration showing the effects of spontaneous combustion.
He-he, so very Lane-like.

Later when I moved to New York Lane became a dear friend and introduced me to a handful of art directors who gave me some of my first big jobs. One of those art directors was his wife Molly Leach. Those were fun times back then in NYC in the 80's. I must admit I miss sitting at my drafting table conceptualizing ideas for assignments and then painting them. Life as an editorial illustrator was much easier than that of a perfume artist. I miss the camaraderie between the artists. Nothing like the cat fights one encounters in Natural Perfume, yuck, that's a whole different story.

Here's a recent video featuring both Molly and Lane in their home/studio in Connecticut.

Posted by Illuminated Perfume at 10:13 PM