The Secret Life of Bees 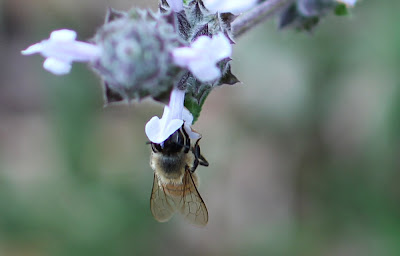 The rosemary on my back slope started blooming early due to the late rain and cool weather we had in 2011. Thus the honey bees have been gathering nectar and pollen from it regularly. 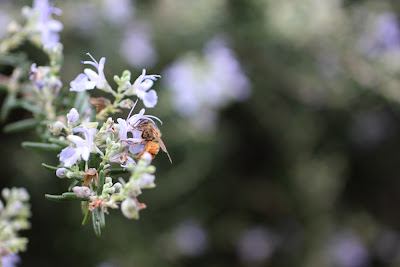 The traditional blooming time of the rosemary hedge and when Spring hits the woodland is now, which means we will be adding an extra box to each of the hives next week. When we do add the extra boxes we will also check the honey stores of the warrior girls to see if there is any extra for us to take now or later. 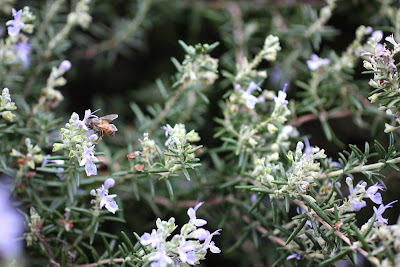 Standing next to the rosemary is quite an experience. Since it is so filled with bees it looks like the mass of green and light blue flowers is undulating with a sound track of the bees aum chant.
I'll be harvesting some of this rosemary to make a tincture for the next edition of Blossom, the traditional eau de cologne natural botanical perfume I release every spring.

Capturing photos of the bees has been a challenge and something I've been practicing. Here are a few recent shots of them followed by an interesting video from one of my fellow b'eeks.

Video courtesy of oldboychoi with this info

A Bee’s Life in a Top Bar Beehive

A compilation of three summer months from inside the beehive. From colonisation of the empty hive to the days following the swarm (that probably reduced the colony to less than half the number).

Bee and rosemary photos ©Roxana Villa
Posted by Illuminated Perfume at 12:11 AM

What a beautiful video, thank you for sharing!
Happy New Year!