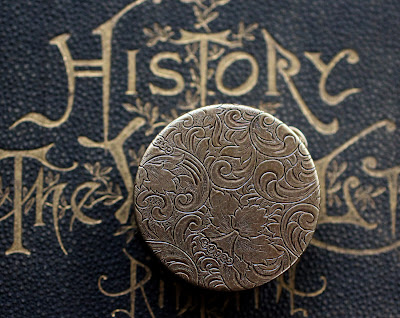 "Life is infinitely stranger than anything which the mind of man could invent." Sherlock Holmes, A Case of Identity (1892) - Sir Arthur Conan Doyle

According to Sherlockian.net's Sherlock Holmes birthday today, making him a Capricorn. I became interested in Sherlock Holmes back in the 80's with the British series starring the actor Jeremy Brett. In my opinion Jeremy plays Sherlock as the perfect Victorian version of Sir Arthur Conan Doyles Sherlock. Here's a clip of the best quotes from the first season:

Last year Eve turned me on to a new series on Masterpiece Mystery theater simply titled Sherlock with Benedict Cumberbatch and Martin Freeman (the new Bilbo Baggins) as Watson. This adaptation is set in modern day and quite brilliant, I highly recommend it. Here's a few clips:

In honor of this blessed day I've decided to begin working on a tribute fragrance to Sherlock as part of the Literarium series of my botanical natural perfumes. Eve and I have come up with a few ideas to begin the formulation:

Leave a comment on this post or send me your thoughts via e-mail (roxana at illuminatedperfume.com) and I will enter you in a draw for a sample of the first draft of the fragrance. Also, feel free to give me suggestions for a title.
Posted by Illuminated Perfume at 12:11 PM

211b would be a good name. I love the Jeremy Brett version of holmes but am not a fan of the modern interpretation. You must see Rupert Everett's one off "Sherlock Holmes and the Silk Stocking". It should be on D.V.D region 1.

Jeremy Brett is the best Sherlock, isn't he! I've never seen another that I thought nailed it quite as well as he did.

Your list of scents made me smile -- to me, "English smells" would have to include lavender and mothballs. My dad's parents were English and that's what they always smelled like!

Yes, Jeremy Brett is as you say "the best Sherlock ever!" Although I have totally fallen for Benedict Cumberlands modern version.

Lavender as one of the English smells indeed. I don't think I'll be doing the moth balls, although great idea.

Angela, thanks for the mention and link to the Rupert Everett Holmes. I had not seen that one, looks so beautifully shot. 211b is a great idea for the name!

When I think about Sherlock Holmes, I'm brought back to the fundamental elements: metal, wood, fire, leather, wool. I also see the color purple, so maybe violet? (Violet also seems metallic and cerebral to me.)

This is abstract, but I think what people love about reading or watching Sherlock is being able to marvel at his amazing awareness. The clues are basic, it's the configuration that makes the difference. The whole "it was under our noses the whole time" and yet we didn't realize is a pleasant surprise. I don't know if you can capture that sense of pleasant surprise with a non-intuitive pairing of ingredients or something like that.

Can't wait to see what you come up with.

The thing love about Sherlock Holmes, and both Brett and Cumberbatch portray perfectly, is his unsentimental nature. In any story, whether it be science fiction, mystery or other suspenseful type, there is nothing worse than a gratuitous romantic thread thrown into the mix just to satisfy some notion that it must be there to round things out. This is especially irksome in movie-making, where lots of market research and audience testing are used. It is too bad that Brett had so many health problems and passed away at age 62. Cumberbatch is also brilliant: the few episodes we got of Sherlock left me panting for more. I have just learned that 3 more episodes have been made--lord knows when we'll get them on this side of the pond... Your notes for a Sherlock perfume have me salivating! Please enter me in the draw--and thank you!

What a wonderful literary inspiration. When you suggested thinking of a name my first thought was the Seven-Percent Solution, though I know it's not a 'real' Holmes book. The scent I think of is that of strong tea - nice black tea with a bit of cream and lemon lurking around the edges.

I love this idea for a perfume... and I love the list of scents you listed. Wonderful!

221B Baker Street, to be precise, not 211! :D It would be a great name for such a perfume, indeed!
To me there's no better Sherlock than Brett, too bad this great actor left so soon...
Best of luck with your creation!

What a wonderful idea, and the fragrance already sound gorgeous. I have always loved the Sherlock Holmes books, and also the two series you mention. Did you ever read Julian Barnes' Arthur and George, which is very interesting too? I do like the name of 221B, and can only think of; Silver Blaze or perhaps Scent of Four. Really looking forward to following your trail;-)

Love the perfume idea, I think I would include a citrusy scent like that of marmalade (not too sweet) which to me is so English.

hmmm...somehow my original comment got trapped in cyber-space!
Great idea Roxana - and I love the new Sherlock too!
Love your list of notes as well. I would include the smell of opium (or the idea of it if it doesn't have a smell) and in terms of it's structure, for the notes to come out in flashes, like the flashes of insight that Sherlock gets.
The name 'elementary!' springs to mind straight away - needless to say!
Have fun with it!
Maggie x