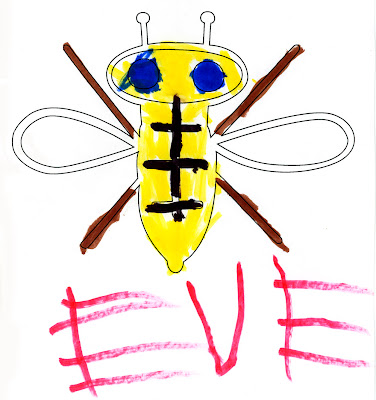 On Saturday afternoon, March 12th two members of my bee club came by the house to assist me in doing a hive inspection on the new warrior girls, the Red Barn Bees. The two gracious bee'ks were Roberta and Ceebs.

I had been at a High School tea prior to the meet up and arrived home a few minuted late to find both of Roberta and Ceebs standing next to the hive filming the girls. To my surprise neither of them were suited up or being attacked. Cool, I thought, perhaps these warrior bees aren't quite the fierce as I thought. Of all the video footage that was shot this one below is my favorite. Witness my girls flying backwards, as in Backwards Beekeeper, trying to pull out string from their hive.

I quickly suited up and got all the equipment together for Roberta and I started the inspection while Ceebs looked on. We began by gently smoking the hive entrance. Currently this hive is three boxes tall. We removed the top, added a little smoke and observed lots of bees but no new drawn comb as of yet. That box, called a "super", was placed on the ground next to us while we looked into the second box. Again, lots and lots of very busy bees. Roberta started lifting the second super when we noticed the bees begin to get agitated. I noticed that this had been brought on by string pulling up a frame in the first box. Angry buzzing arose, I got stung on the ankle by bees walking on the ground while Roberta was stung through her gloves.

We choose to stop the inspection since the bees had assumed warrior mode. Comically, after swiftly putting everything back in place, the bees decided to chase us. Since we had our suits on it was more just an annoyance than anything else, although upwards of an hour later the girls continued to harass and head butt us. Kidding!

A few lessons were learned here:
Meanwhile, Eve and I have been going through a huge box of her drawings from when she was a child. Sifting through what to keep and what to discard. It's been quite a fun journey. Childrens imagery is so very special. As we burrowed through the pile, Eve unearthed a piece exclaiming, "Mom, look at this, just for you!" Ah, how sweet, it was a honey bee. Although she hadn't drawn this one, I still love it very much, especially her signature with extra horizontal lines for the E in her name.

Image: Honey Bee by Eve Neuhart
Posted by Illuminated Perfume at 10:40 AM