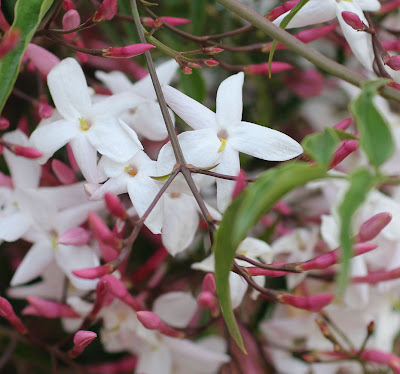 Way back in the nineties I was gifted a tiny cobalt blue vial of a Jasmine enfleurage from France. It was extremely special because of its rarity and cost. I've cherished it ever since and never really considered doing the process myself...until now. 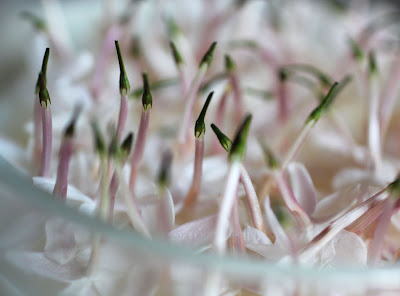 The process can be seen really well in the 2006 film "Perfume: The Story of a Murderer" when the lead character Jean-Baptiste Grenouille goes to Grasse and is seen delicately pressing flowers into fat. 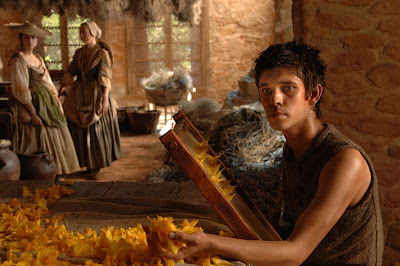 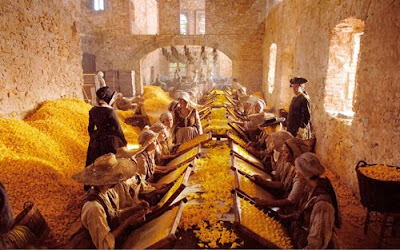 Enfleurage is defined as a process of absorbing the aroma of fresh plant material, usually a single flower, into fat. The systematic repetition of adding and removing the flowers may be over a period of many days.

Since the pink jasmine, Jasminum polyanthum, is now blooming here in SoCal I have finally delved into this technique using some key pointers from a soap maker in Valencia, California named Jo Lasky. My first batch is made with flowers from my small, somewhat neglected pink jasmine. As soon as the mango butter arrives I will be going into full production mode using the pink jasmine planted at my mothers house in Encino more than ten years ago when I lived there.

In the meantime here is what I've done on a small scale and what you can do if so inspired:

1. I gently melted some organic virgin coconut oil I had on hand and poured it into a shallow glass dish. 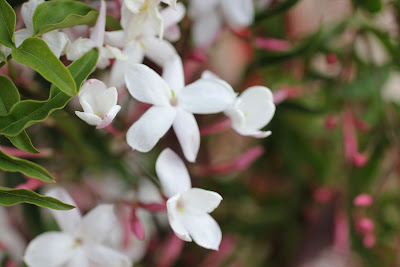 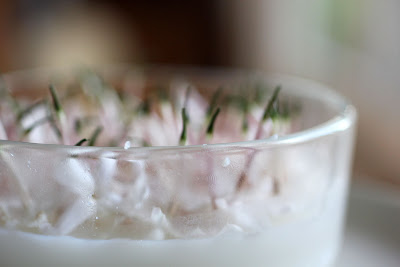 3. Once the coconut oil had solidified, I made sure the flowers had no moisture and gently laid them face down on the top of the fat. 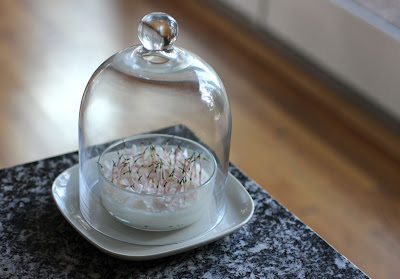 4. I then covered the dish to make sure the aroma chemicals emanating from the blossoms were contained within an insulated headspace

5. Once the flowers have been spent, probably in about 72 hours, I will remove them and add new ones, repeating this process until the butter is fully charged with the scent of the blossoms.

6. Traditionally an enfleurage would then be washed in alcohol to become an absolute. My intention is to use the enfleurage for the body butters I have been formulating.

Once my Jasmin sambac, Gardenia and Plumeria start blooming I will begin this technique with those blossoms as well.

Images and content ©Roxana Villa
Posted by Illuminated Perfume at 9:00 AM

So wonderful that you're doing this - please let us know when the body butters are ready!

So elegant, love the use of the cloche over the delicate jasmine flowers. I adore the scent of gardenia, excited your new lovelies.

What an interesting procedure! Thank you for sharing it with us.

I've been hoping you would do a gardenia! Looking forward to the body butters. When do you think they will be ready?

Hello sweet hearts, thanks for stopping by. The body butters without the extracts from the enfleurage process will be ready fairly soon.

That's a beautiful challenge. Indeed - why not to try make it yourself. And it hasn't not to be that comlicated. Wish you good luck with enfleurage and hope to read about the finished product!

Wow, that sounds beautiful. I love the scent of jasmine.
Really interesting post:)

Hey Aromax, so nice to hear from you! So when you say "why not make it yourself", are you speaking of the Jasmin enfleurage into an absolute? If so the reason is that it will be quite of a lot of work with very little essence in the end. For now I'd rather buy Jasmin absolute and use the enfleurage for body butters.

Oh, Roxana, I am just amazed by the simplicity of the performing of the idea of enfleurage. Knowing you need a lot of material and frames and people to help are a kind of prohibitive factors to try enfleurage on your own. But looking at your pictures I see - it can be just as complicated as you make it. You can experience the process itself anyway ;) Yes, I understand that you don't go till the absolute, but will finish with the fragrant butter :) BTW - why did you choose enfleurage and not infusion? Just curious.

AromaX, I decided to try the enfleurage method of extraction because the results from infusing flowers into jojoba oil has been disappointing. Currently I have an infusion of jasmin sambac flowers in the refrigerator, unfortunately the aroma is very subtle. I'm hoping that the enfleurage method will produce a much more fragrant result. We shall see, and smell!

Oh, that's a pity to hear that infusion was disappointing. But from other side - thank you for sharing - good to know which method works and which not.

Hi Roxana, I love this post! I have a question about the process. Once you remove the petals after 72 hours, do you remelt the coconut oil? Love, love your blog!
Sylvia

Hi Sylvia,
Thanks for visiting. When you remove the jasmine flowers all you do is add more, no re-melting of the coconut oil.
~ Roxana

hi I've been reading up on enfleurage a lot recently and coconut oil seems to be an excellent choice if your not going to be making the absolute, however i was wondering if your coconut oil had a coconut scent(since you mentioned it was virgin oil). has that affected the results. btw i love pink jasmine it reminds me of watermelon candy

The primary scent in the jasmine enfleurage I made in March is that of the pink jasmine flowers. There is a very subtle scent of the coconut oil but I have a feeling that if I had infused the oil with more flowers that sent would not have come through. I am going to be using this method with my jasmine sambac flowers which are just starting now, but instead of coconut I will be using mango butter.

Hello, were the flowers dried or fresh?