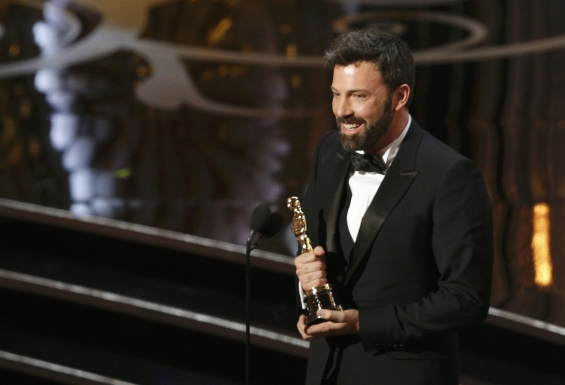 For several of years now, on Oscar night we head over to the home of Brad and Chiara in Encino for a meal and take in the show. The tradition began because we do not have TV hook up here at the house and Eve wanted to see the spectacle. Although Eve was not physically with us, she most certainly was in spirit.

All and all the overall show felt a bit over the top with the dance numbers and as if the niche market the show was appealing to was one that was not very sophisticated and the 70-80 year olds. Enough with the wacky dance numbers already and, personally Tiny and Amy blew this years host out of the water.

The buzz I was hearing from friends here locally in LALA land was mainly about Lincoln (although Lois was snubbed for her makeup work on the film) and Silver Linings Playbook. I thought for sure one of those two films would take it, thus when Argo won a loud "Hoorah!" erupted from my body. Given that I haven't seen the film, this outburst was a bit of a surprise, until I contemplated that it represented a victory for the smaller dude.

Although I knew, without having seen Lincoln, that Daniel Day Lewis would win for best actor I was holding a torch for Joaquin Phoenix in "The Master." Eve had gone to see in The Master in 70mm with a group of her friends during a brief visit to NYC. In fact she adored it so much she saw it twice and both times raved to me about how exquisitely beautiful the film is and some of the most amazing performances she'd seen.

Gregs response was, "Well, Joaquin is a great actor and as we know the best doesn't necessarily always win the award."

The thing that I am most thrilled about is that Argo won, what a mind blower. I took note how Ben Affleck said not to hold grudges, something I am working on in the current industry back stabbing/truth manipulating industry I am in. Instead of grudges I've been focusing on how the nemesis facilitates the opportunity to refine ones self.

It was a relief that the academy included Eiko Ishioda in the In Memoriam Tribute, although a shame that no other special mention or acknowledgement was given to her. As you may recall I was quite upset last year when she wasn't mentioned.

The best part of the show, in our humble, artistic opinion was the 007 tribute, a master piece of editing, which unfortunately I could find online to include here in the post.

Opening image of Ben Affleck via EnStarz.com
Posted by Illuminated Perfume at 12:02 PM