The Nose: Searching for Blamage

Rarely does an event invitation arrive in my inbox where I feel compelled to attend, such was the case when I received an invite to attend a private screening of The Nose: Searching for Blamage. I immediately RSVP'd YES for Greg, Eve and I without a second thought, it was pure instinct.

Thus last Friday evening, instead of heading to Whizin for the monthly Street Art Live event, we set off in the opposite direction to Raleigh Studios for the private screening of The Nose: Searching for Blamage in Hollywood.
Upon arriving we were instructed to "wait" at the on lot cafe/bar amongst a crowd of well dressed professionals in expensive suits strongly scented in woody-type fragrances. Later that evening, it occurred to me that some of the suits probably worked at the Barneys perfume counter and other similar locations. 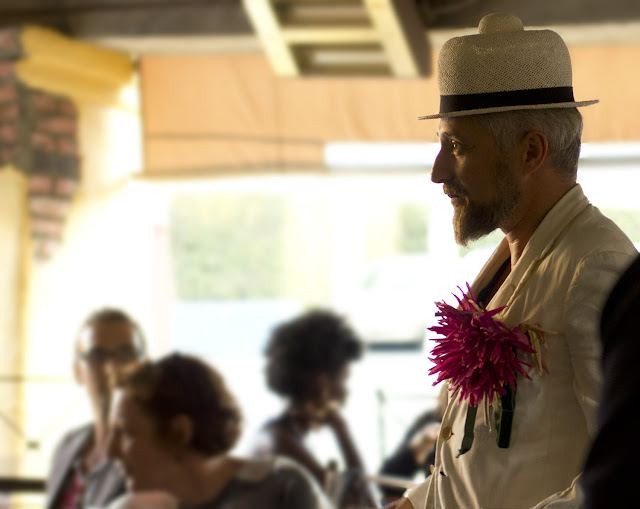 I spotted the "nose" of the hour immediately by the large magenta colored dahlia on his white jacket and the festive hat. His name is Alessandro Gaultieri, an Italian born niche perfumer who after creating fragrances for a few giants in the fashion industry (Fendi, Versace, Helmut Lang, Diesel, to name a few) choose to launch Nasomatto, his own brand.
I knew nothing of this, or his perfumes, except for what I had seen in the trailer of the film we were about to see. 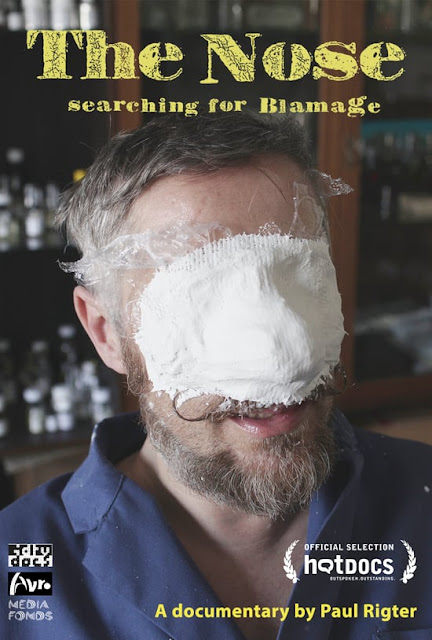 Gualtieri exudes charismatic Italian charm with a very healthy ego and perhaps a bit of genius. One of my friends, who had come along with us, referred to him as an Alpha Male. He currently lives in the Netherlands, where he has a beautiful studio saturated with natural light. The film we were patiently waiting to see, by director Paul Rigter, documents the making of a perfume titled Blamage.

Mr. Rigter followed Alessandro as he reluctantly set out to design the tenth and final fragrance for Gualtieri's Nasomatto Perfume House.

The film begins with a plaster cast blindfold over Alessandro's eyes and nose, excluding his nostrils. He is led to his organ to select four ingredients that begin his quest for the creation of Blamage. I'd never heard of the four ingredients he randomly selected and assume they are all synthetic by the name and also by the fact that all the bottles were clear. Essential oils are usually colored, and stored in dark glass because they are light sensitive. 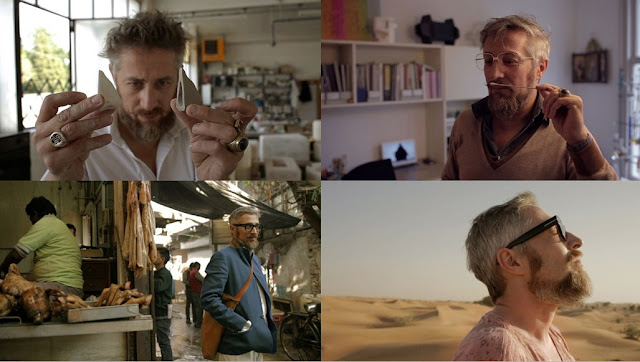 The name Blamage is loosely translated as mistake or disgrace. In the opening of the film Alessandro speaks about how some famous perfumes, such as Poison by Dior were accidents in a lab from the addition of too much of an ingredient.
My husband Greg calls this a "happy accident" and relies on them quite a bit. Once the blindfold is removed Alessandro sees what he has chosen and remarks “Cazzo!” which translates as a vulgar version of penis. Later we learn that he is quite irreverent and appears to rather enjoy heavy indolic odors of the human body.

Alessandro is a walking, complex contradiction – he is beautiful with piercing sky blue eyes, extremely creative, warm and magnetic juxtaposed by his shadow side. Like many perfumers, he holds a fascination for the darker or cheeky aspects of human aromas and our bodily fluids. Somewhere online I read that his spokesperson, probably Rita, said: 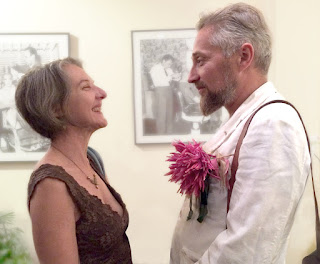 Sure Alessandro, I get where you are coming from, particularly as an artist and a perfumer. However, if you smelled of shit at the film screening I most likely would not had wanted to hold your hands and gaze into your hypnotically, enchanting eyes.


Mr. Rigter traveled with Alessandro to Delhi in India, the Esxence perfume show in Milan and the middle east. The caption for the film reads:

"Witness the adventurous quest for a new perfume, called Blamage, by rebel perfumer Alessandro Gualtieri aka The Nose. He wants to design this fragrance by abandoning all the common rules for designing perfumes. For inspiration he travels around the world, but the farther he goes, the more he seems to disrupt not only his environment but also himself. Will Blamage turn out to become the perfect mistake?" 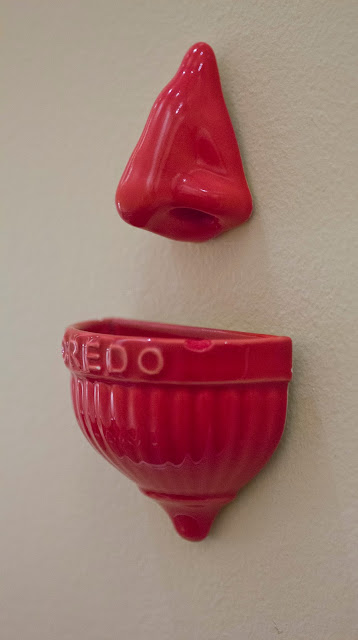 I had incorrectly interpreted that the quest was a search for raw ingredients, probably a projection on my part. Since his fragrances are most likely synthetic, the use of pure sandalwood oil from India, or the newer distillations coming out of Hawaii and New Caledonia would be impossible for a fragrance house selling such large volume of perfume under strict IFRA regulations. Thus, his search throughout the film is for inspiration not actual ingredients that would go into the fragrance. I am speculating at what raw materials he uses because he refuses to disclose information regarding notes and/or ingredients.

In one scene, while Alessandro walks through the crowded, dusty streets of Delhi he encounters a store with perfume knockoffs, one of them is his popular fragrance Black Afgano. His reaction to testing the knockoff with the vendor in site, is absolutely priceless.

Paul Rigter, the film maker behind the lens of the 52 minute documentary, both wrote and directed the piece which was stopped before the final version of Blamage was finished. Mr. Rigter perfectly captures all the qualities that make Alessandro so unique: magnetic, lovable, quite fun, retrospective. He is a pleasure to watch throughout the film, despite his somewhat vulgar characteristics. 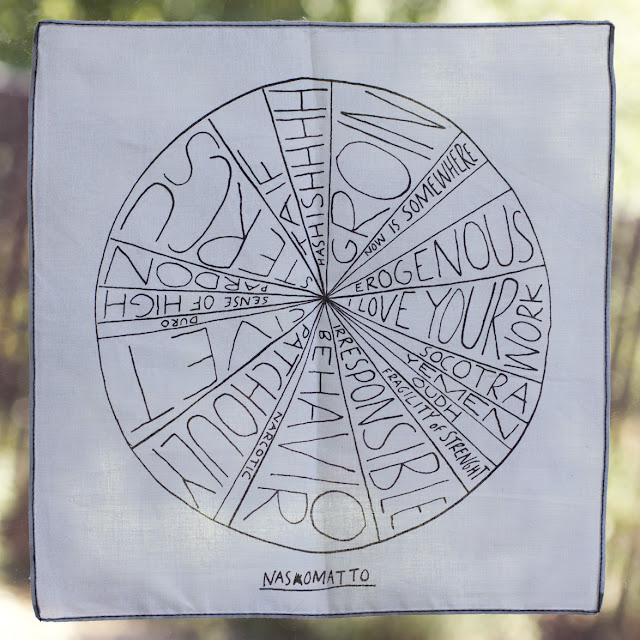 Within the screening room, a fragrant handkerchief was draped over the top of each velvety seat. We picked ours up and inhaled, I immediately picked up notes of citrus and herb, as I tuned into them more deeply,  I began to think perhaps neroli and something that reminded me of celery.

After the screening, when Alessandro came back into the room, he told the crowd that he had a game for us and shared that behind everyones head there was a handkerchief, which had been sprayed with a perfume, except one. The exception contained Blamage and the person who could discover which handkerchief has Blamage will receive a bottle as a gift. The young gal seated behind us was the lucky winner of the bottle.

I asked what was on all the other handkerchiefs, mentioning that I perceived notes of neroli and celery, Alessandro replied that people shouldn't get hung up of perfume notes and ingredients, that when we look at a painting we don't ask what the materials are, we experience the piece. Indeed, I can see where he is coming from, however mentioning a few notes AFTER asking about how the perfume makes one feel or what notes one is picking up would engage us in the story a bit more.
I left the event with no idea what fragrance was on the handkerchief. I was convinced that it must be another version of Blamage because Eve, Greg and I...as well as my purse and house reek of an indolic, smoky sandalwood which I thought for sure was how Blamage would smell. Saskia, the organizer of the event, informed me that Bergamask, from Gualtieri's new House, Otro Parisi, was on the handkerchiefs that were not scented with Blamage.
Ah-hah, no wonder Alesandro didn't want to talk about it, but also how intriguing that the event contained the last perfume for one House and the first perfume for a new one. Bergamask has a very a sharp citrus note on the handkerchief but the dry down is what makes it super interesting to me, it's almost narcotic due to those heavy, rich, dark and burning incense notes.

In 2014, with the completion of Nasomatto, Alessandro revealed his creation of Orto Parisi. The name of the perfume house is inspired by 'orto' which means garden combined with the last name of his grandfather 'Vincenzo Parisi'. According to Alessandro "We don't talk about the notes but in all of them there are two main animal notes. This is not to cover our smells but to put another layer on."
His booth at the Excense show in Milan showcased a furry, defecating hairy creature. The five fragrances debuted in that line were: Bergamask, Viride, Brutus, Stercus and Boccanera, all of them were presented on a compressed bed of horse manure.

Here is the trailer that is on YouTube, there is a much better one on Vimeo where you can also watch the film on demand.

"I begin to make something but at a certain point, it starts making choices by itself. It is the process that interests and guides me. I like the feeling of loosing control and I’m not the one making the choices. My involvement is to create something that is alive and will be able to say new things. I want my perfumes to have an intelligence of their own, not just be slaves to my meaning."
~ Alessandro Gualtieri

The Nose: Searching for Blamage
Posted by Illuminated Perfume at 7:48 PM

Hello, I saw this film last year at the Hot Docs festival in Toronto. No doubt that Alessandro is very eccentric but I found the film fascinating and particularly liked the sequence where he visited the perfume shops in India. It is an very interesting look into the creative process.

Hi Anna, Yes, I agree, the part where he visits the perfume shops in India was great fun and fascinating! Your comment makes me want to watch it again. It must have been great fun to see it in a festival setting.