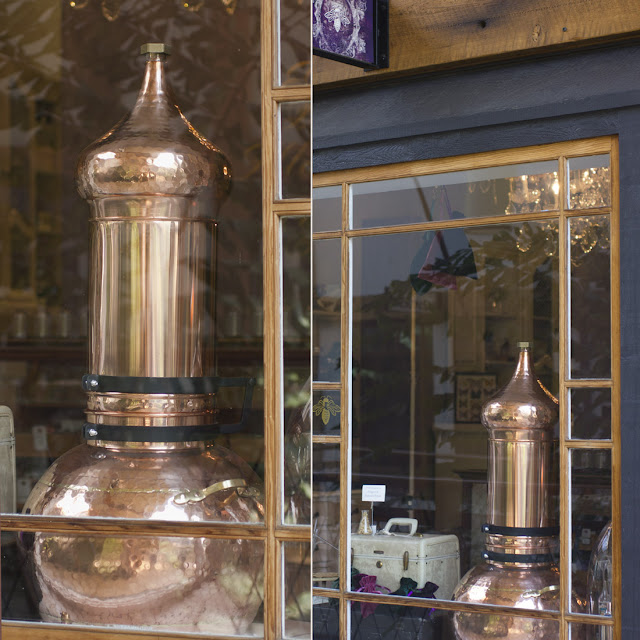 I am excited to share that a beautiful, cooper alembic has been sent to me. I have chosen to name the still "Spiritus", since the word was one of the names given to the first distillates which were made with wine, herbs and citrus.

Now that the course is finished I have been getting my ducks in a row to dive into this very ancient and alchemical art.

Auspiciously, my local friend Monika Peters began her own journey in distillation last Autumn, thus I have a "distillation" buddy! On Friday Monika and I decided to distill, thus Sunday I headed out to her home high up in the Santa Monica Mountains overlooking the Pacific ocean to do some with my still. We had planned to do a distillation and also "prepare"my still that day. Unfortunately Monikas hoses were too small for my still, so that task is set for another day...perhaps this week. 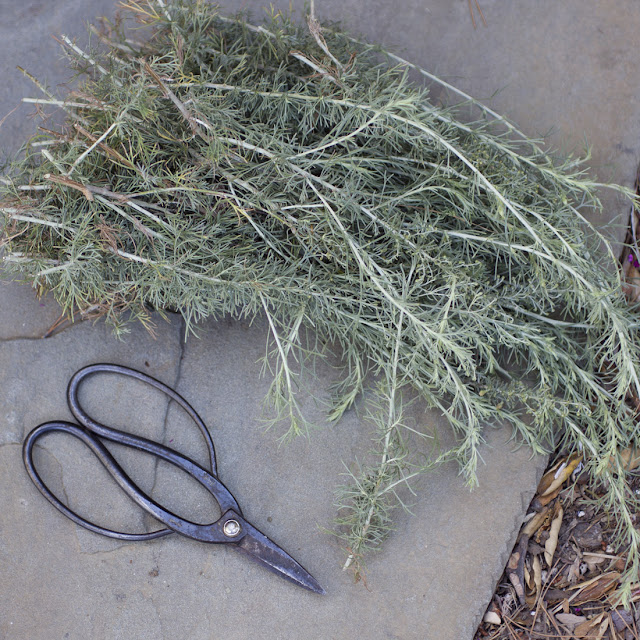 For the distillation I had Greg purchase some fresh picked, organic lavender from Fillmore at the Farmers Market on Saturday, which came with a few sprigs of mint and lemon verbena. During twilight I went out into my garden hunting for something to pair the lavender with, I was considering white sage, when the Artemesia californica caught my attention with her new shoots gently waving at me. I asked, "Oh, would you like to offer your new shoots to be converted to spirit?" I felt that the plant indeed wanted to be part of the endeavor. Thus, very early on Sunday morning, amidst the gentle song of the birds I harvested a bundle of the artemesia and gave the plant a small carnelian crystal in return for the new shoots. One thing that I find interesting about this particular plant on my front slope is that it came up on its own, most likely thanks to a bird or coyote droppings.

I then put the lavender bundles and artemesia into a bucket of filtered water while I loaded Spiritus into the car and all my other gear for the day. As I placed the bucket with the plant material into the car I decided to add a quartz crystal in with the plants to help maintain their vitality.

After determining that we would not be using my still we set up Monikas, which she named Grace. We then decided to gather some rosemary from her garden to pair with the lavender and artemesia. Thus we had a trinity of local plants from the Lamiaceae family. 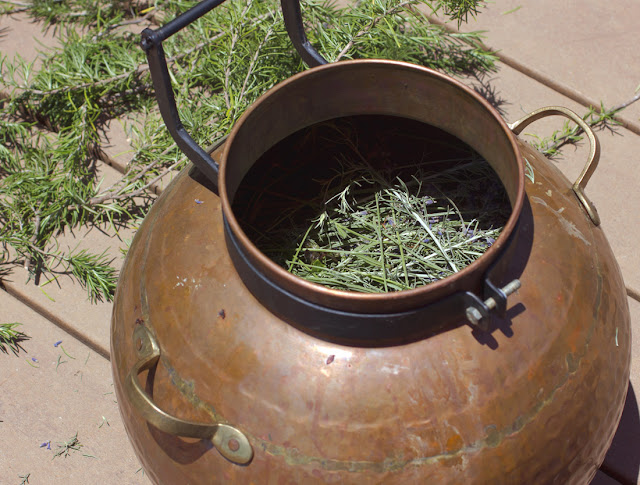 We assembled all the apparatus and then weighed our plant material. Next we covered the plants with water, keeping track of how much water we used. Meanwhile Monika noted all these details and more on a paper in her notebook, including other items like the date, time, location, temperature of the day, if there was wind, etc. It was a perfect day, sunny, 79 degrees with light wind. 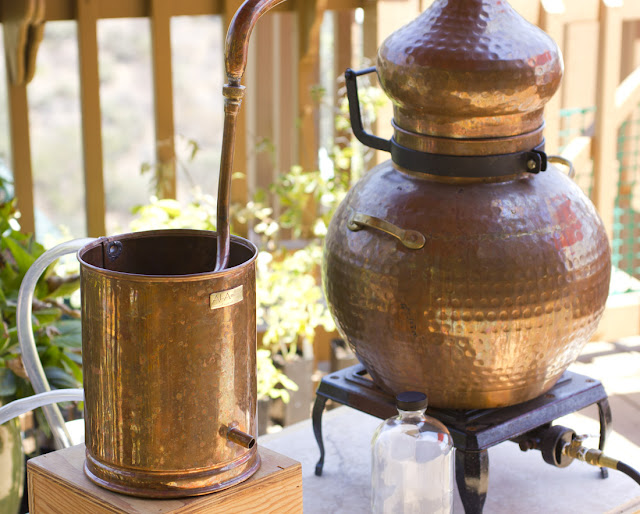 Next, at 1:58pm we fired up the stove! Although we could smell the beautiful aromatics as everything began to heat up it was at approximately 2:10pm we saw the first drip of our hydrosol. An incredibly exciting moment! 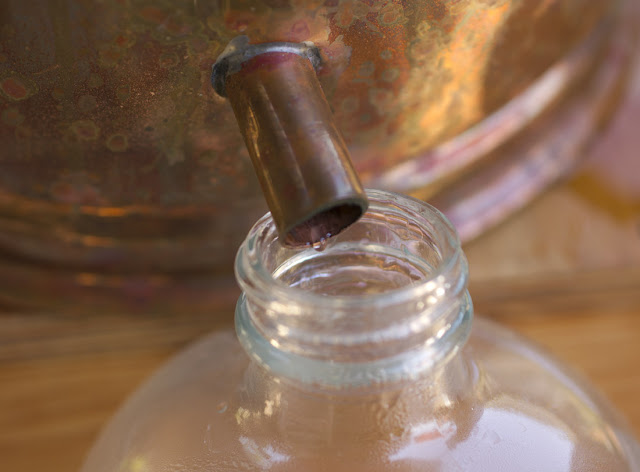 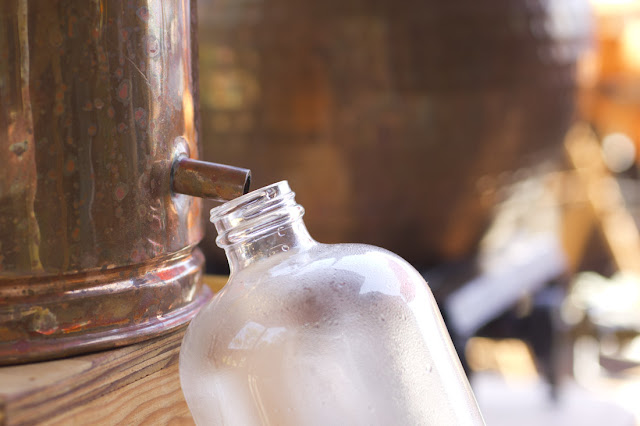 During the process we tested the ph and noted the aroma and taste of the water. At 3:11 we decided to turn off the heat and end the process, although later on we realized we could have let it go a bit longer. 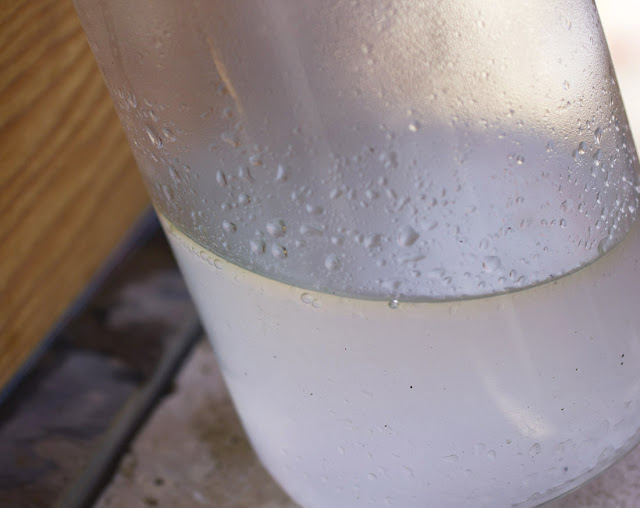 Hydrosols, also referred to as floral or herbal waters, were originally called "hydro-lats" lat meaning milk, because of the whitish color of the water as it comes out of the still. The yellow colored liquid floating on top of the water is the essential oil.

The process gave us 16 ounces of a beautiful fragrant water with notes of pinene, camphor, lavender and lemon. Once the herbal water sets for a bit and we separate out the essential oil I will go on a little tasting/smelling journey with the hydrosol and see what she shares with me. Meanwhile, the quartz crystal that I added to the herbs ended up going into the distillation with the plants and seems to have disappeared. 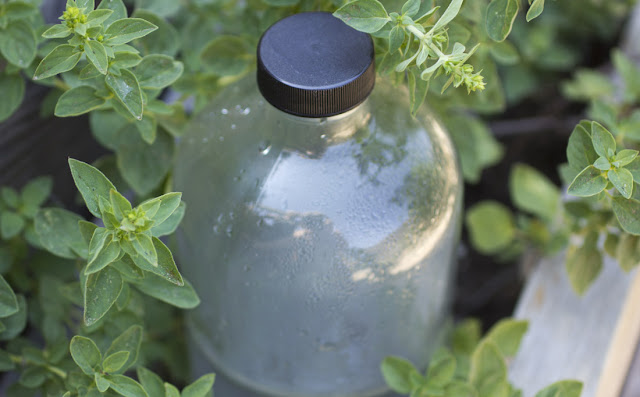 Posted by Illuminated Perfume at 12:34 AM

I am looking into taking your course. I would like to purchase a copper alembic to make my own Hydrosols. May I ask where you purchased yours from. I know they come from Portugal or Spain, but a link to purchase would be helpful.

Hi Angela, The still was given to me as a gift. It was purchased from Al-Ambiq in Portugal: http://www.al-ambiq.com/. It might be better to get it from another source, mine arrived dented in a rather flimsy box, the customer service at Al-Ambiq has been atrocious.