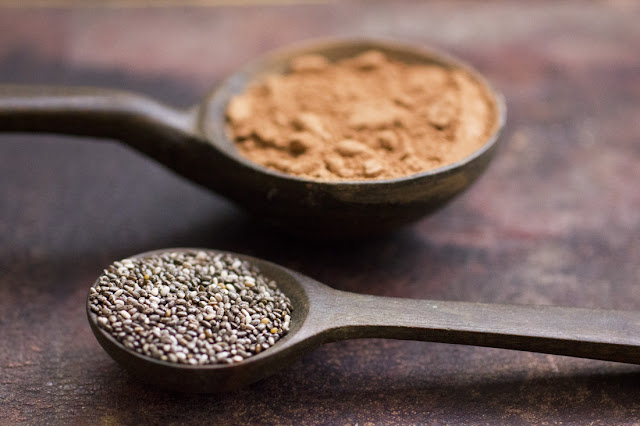 As I typed the title for the post I wondered if anyone had distilled chia seeds, because if so these could be the ingredients for the start of a comforting, gourmand perfume!

Ever since tasting a sample of a chocolate vegan pudding from the Erewhon Market in Agoura Hills, I've been experimenting with making one that was just as good or better. Today I have finally succeeded!

During my many attempts I found that Let's Do Organic Organic Heavy Coconut Cream is an awesome base. Most coconut creams and milks have fillers like guar gum, in fact I have started noticing that many brands are even adding gums to regular whipping creams. Native Forest Organic Simple Coconut Cream is another good one but not quite as thick. Both these specific items have no fillers, but be mindful, there most coconut milks and creams products that do, thus, always read the ingredients on the label. I suggest avoiding purchasing the product from Amazon or Whole Foods since those two conglomerates support politics that are not good for people, humanity, and a sustainably lifestyle. I purchased mine from Thrive.

I started with a recipe I found on the back of a chia seed package and modified from there based on others I've been testing over the past six months, like this one.

Directions:
Scoop the chilled coconut cream into a bowl and using a hand held mixer, blend on a low setting. Next add all the other ingredients and mix again slowly increasing the speed until everything is well combined and has the texture of pudding. Your delicious healthy pudding is now ready to eat. I placed mine back in the fridge for a few hours because I used the Native Forest Organic Simple Cream which isn't as thick as the Heavy Cream. Enjoy and report back!

Posted by Illuminated Perfume at 10:45 PM