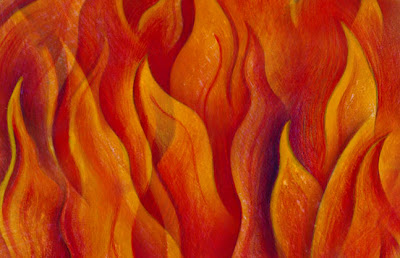 Friday in the late afternoon I began an intensive weekend course on Natural/Botanical Perfumery, really working the olfactory muscles in a big way. I'd arrive home after a very full day, exhausted on multiple levels.

Saturday night, or was it the wee hours of Sunday morning, in between bizarre dreams of fragrance families I was awakened by "swooshing" type sounds. At first I thought "wind"...no, wait....is it rain? As I lay there in a space between worlds I was reminded that the elementals (Air, Fire, Water and Earth) have the ability to remain calm and serene or in massive motion. The wind blowing around our little home was most definitely in a state of extreme vitality. Today I learned that the winds were gusting at hurricane force.
The dynamics of the wind combined with very dry conditions has awakened Fire element. We currently have over twelve fires burning in the Southern California area, from Santa Ynez, up near Santa Barbara, all the way down to San Diego near the border of Mexico. Since the Winds remain extremely active fires blaze out of control, despite the best efforts of our local firefighters.
Fire in our area chaparral eco-system is part of a natural cycle. From vegetative growth, brought on by a very wet winter to drought to fire. The large fires, propelled by high winds in the Autumn, tend to move quickly through the sheer walls of the north and south running canyons. The fire gains agility by consuming the dry, woody brush as it becomes larger and sweeps through the Santa Monica Mountains. If the fire was allowed to burn through the canyons in its natural cycle, then we would not have this repetitive situation. However, due to all the homes that are now in these canyons as well as non-indigenous plants, like mustard, the natural cycle has been interrupted.
So, here we are, in the Santa Monica Mountains, at the tale end of one of those south to north running canyons, Topanga Canyon. We will see what Mother Natures elemental children have planned for our local area. As I write this, Air element continues to jostle, the sounds of helicopters is constant and the sight of smoke is visible in the distant hills.

BTW, the color orange is associated with the Fruity fragrance family, more on that soon.

The image above center is cropped from an illustration titled "Anger Management", the element FIRE is often associated with anger. The image above and to the right is called "Light my Fire", both ©Roxana Villa.
Posted by Illuminated Perfume at 9:18 AM