I first experimented with an EDC, eau de Cologne, in November of 2005. I built the fragrance utilizing a tincture of bay leaves and a synergy combining bay laurel essential oil with spices and citrus. It was the first time I had ever added water to a combination of alcohol, essential oils and tinctured material. Referring back to my meticulous note taking I notice it took a few tries to get the whole darn thing working.
The secret lies in the drop by drop approach followed by filtration. The process definitely reminds one of how closely linked to alchemy perfume making is.

In December of 2007 I decided to attempt a more traditional EDC incorporating the classic herb and citrus combination. This is something I had been sketching and pondering for years. The first perfume I ever wore was an Argentine cologne which my mother and grandmother doused me in regularly. It was fabricated by my grandfathers company Quimica Estrella. My cologne experiment didn’t get very far due to other obligations. However three months later, in February 2008, I was contacted by Sandy Messori of Rivendell Aromatics to be the keynote speaker at the Ojai Lavender Festival. I decided to continue my EDC experiments with the intention of creating a fragrance devoted to Lavender specifically for the event. The EDC path took me to the creation of the botanical perfume Vera, named after true Lavender, Lavandula vera. In nomenclature the term "vera" has now been replaced by angustifolia or officinalis referring to the official plant used in medicinals. 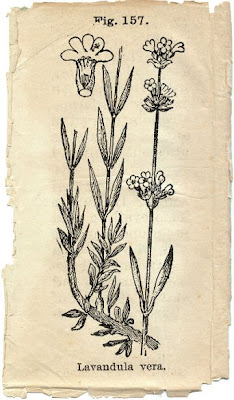 Vera began as a traditional eau de Cologne combining citrus with lavender. The fragrance surpassed the simplicity of an EDC with the addition of several base notes and a fully developed heart. I decided to paint an authentic landscape of Ojai with this fragrance and thus tinctured both Lavender and Sage. Both herbals used in the tincture were grown in Ojai. I also utilized essential oils that were distilled in the region by locally grown plants. Upon studying the history of the area I weaved in notes associated with the first natives and the Chumash Indians. The addition of Orange Blossom in the heart was brought in for the orange groves that have become emblematic with the region.

Image of Bayrum bottle at top and Lavender at bottom are old engravings I placed on parchment in Photoshop ©RoxanaVilla.
Posted by Illuminated Perfume at 8:00 AM

In the 30s and 40s boys were anxious about wearing long pants and shaving, even if they were short and was little to shave.
To me both came the same year,1942.
And after the first shave, I used my father´s BayRum. My cousin Jorge was watching and after my shave he said "This call for a celebration". So we both sipped Bay Rum.