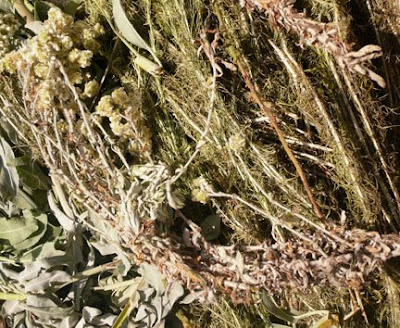 The LA Sniffapalooza, also termed Fashion Fragrance West, has only a few seats left. Here is a link to read the latest update of participating perfumers, stores and giveaways.

At the LA event I will launch a new perfume that has been in development since March 2005. It began as a complex accord and has gone through all sorts of flips and wiggles, shape shifting regularly. Finally in June of this year, as I was conducting trials for a solid perfume, clarity broke through. I realized sage was the key component.

This perfume is the next in the Californica series, following last years debut of Sierra. I choose the word Californica because it is the species name found in many plants native to California, for example Artemisia californica. (Artemisia is the genus, californica the species.)

I've decided to keep the perfume a secret so that the Sniffapalooza members will be the first to experience the fragrance. Anyone who has been reading this journal regularly may already know which native plant this perfume is based on. The couture pouch, which will house the French glass flacon, was created last Spring. In fact last Spring was the scheduled release for the fragrance. Interesting because the formula back then was not nearly as animalic as it is now. The perfume will also have a companion version as a solid in a antiqued compact.

This mystery perfume shares some of the same accords and tinctures found in Q, Chaparral, Vera and Sierra. A few days ago I realized that this was the fifth perfume in the series. Did you see the film the Fifth Element? Do you recall what the important fifth element was?

My friend Meghan introduced me to this plant which inspired the upcoming fragrance. Up until a little over a year ago, I didn't even know it existed. The native plants of California are a bit mysterious unless you hike regularly in the local hills and pay close attention, beyond the sages. In one of the books lent to me by Meghan, the plant community is referred to as An Elfin Forest. The reason for this name is that one must look closely to indeed witness the magic held in these plants, most of which are quite low to the ground. Besides the elfin sized flora, the fauna found in this community are also quite small.

"These are indeed strange days.
Dreams and legends spring to life out of the grass."
~ Eomer, Lord of the Rings
It seems to me that Natural/Botanical perfume and California native plants both share a magic only revealed to those who stop, and with keen observation, begin to truly witness the secrets of an authentic landscape.