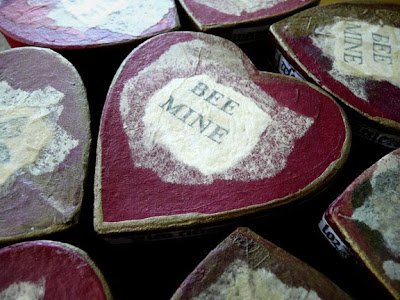 In February of last year I created special little Valentines for a few individuals within my sphere. For the most part the individuals were those who had shown quite a bit of support through out the year, mostly composed of those glorious patrons we artists adore.

The intention was triple fold: 1. Promote. 2. Take advantage of the holiday to create a special one of a kind item for specific folk. 3. Get creative and do some painting. 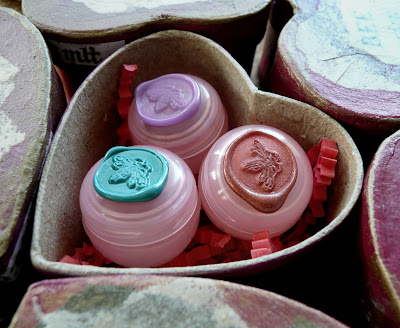 While in the large studio one day I discovered a little gift I had created for Greg while he was working in Texas. The box was a simple heart shaped, cardboard shaped box picked up at the craft store. I painted it with my acrylics adding a few decoupage items and then filling with caramels, one of his favorite candies. This gift was made out of love and longing. He worked in Texas for 16 months, both of us flying back and forth for short little visits.

I came upon the box rather auspiciously while I was mentioning to Greg that as an illustrator I would use the holidays to do special promotions and thought it would be good to do the same my perfumes. As I was talking I caught site of the box. Ah-hah! I could re-create these boxes and fill them with a few little pots of solid perfumes! 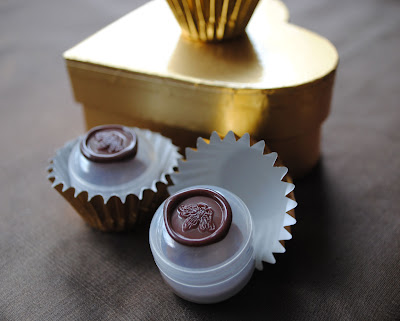 So I did. In the process, the idea to create the chocolate natural perfumes was birthed. Albeit I had no idea what a challenge that would be both from a packaging and fragrance aspect. A year later, here they are. Samplers were sent to a small, exclusive group, including some of the same sweethearts as last year.

In the works are more, to fill the large heart box with eleven chocolate delights and body butter to slather all over oneself or perhaps ones lover. Posted by Illuminated Perfume at 12:25 PM