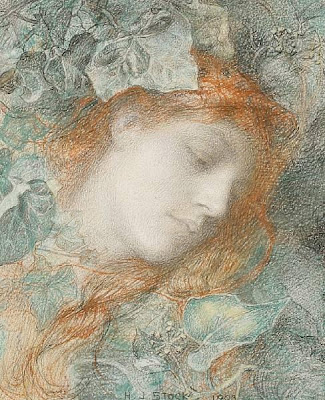 Greenest of the pastures, sweeter than grasses.

Ivy, the twelfth letter in the Tree Ogham goes by the letter G and the name Gort, meaning green field or garden. According to Blamires some legends and poetry refer to honeysuckle and woodvine interchangeable with Ivy.

We interpret the message of a plant by observing where and how it grows. Ivy is a very tenacious, evergreen which uses another plant as a host eventually smothering and/or killing it. Ivy in the physical world is witnessed growing as a ground cover, on trees, and the side of a building. The deep green waxy leaves have four or five pointed lobes growing from long vines which rapidly cling and wrap themselves spiraling upwards. Paul Rhys Mountfort in his book Ogam, The Celtic Oracle of Trees calls this a basic archetype of growth and endurance which we can witness in the structure of our DNA and the patterns of the

The survival instinct of the Ivy is fierce with the ability to grow in adverse conditions, exploiting anything found in its trail in order to prevail. Ivy is a ruthless parasite prepared to use what might appear unfortunate as a benefit. The lesson of the Ivy in our physical world is related to a aggressive warrior spirit. There are moments in our lives when an indomitable will force is needed to move forward, this is the positive aspect of the Ivy spirit which we can tune into. In doing so clear mindfulness is needed so that we do not choke others or ourselves in the process.

For the Tree Ogham of Ivy I have created a liquid and solid natural perfume title Hedera helix. Originally created in April of 2007 as a liquid perfume, I have duplicated the original formula with a few minor additions for the solid. When this fragrance was first created I began by making a list of essences which smelled green and Ivy-like. I then created five different versions labeled Ivy 1, 2, 3, 4, and 5. Number five in the end prevailed, like Coco Chanels first perfume.

The structure of the fragrance has the characteristics of a Chypre with a very classy air. The oakmoss and resins in the base give the liquid perfume some powerful longevity. The aromatic notes are woven very tightly so that individuals are not easy to perceive. The best words I can use are: mossy green, floral Chypre. I utilized many essences with a green profile as well as those that come from green leaves. On the skin of those who have tested it for me it is quite beautiful with fabulous silage. I have sent samples to varies bloggers thus perhaps you will have the opportunity to read some collective thoughts.

This perfume was made at a time when I was removing large amounts of Ivy from my garden in order to plant California natives. I had witnessed how destructive Ivy was to the oaks and other plants that grew alongside it. Thus, had Tonie Silver not made the request for this fragrance it probably would never have manifested. Here are Tonies words about Hedera:

"My favorite potion from Roxana was a special commission per my request. "Hedera helix~ the mighty Ivy Dark green leaves, reddish, yellowish pink vines, and that special sharp tang that ivy possesses. This is the big, aged, thick leaved ivy of my Grandmother’s front porch, climbing and twining in the shade. Cool and crisp, an inviting home to innumerable dark creatures." 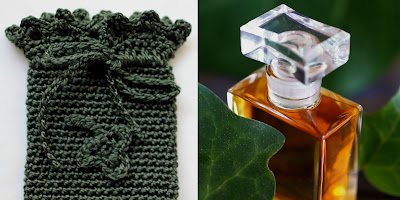 The color harmony for Ivy is a deep, mossy green. Hedera helix is currently available as a liquid and solid perfume at my website.

Happy Autumn Equinox to those in this Northern hemisphere, a time to breath in this sacred moment as we begin our preparations for the impending darkness of the seasonal year.