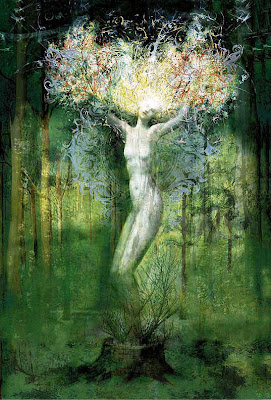 The constant in Celtic tradition accepted by all the scholars is a deep reverence for nature, specifically the trees. Like the native people of the Americas, the Druids viewed the world holistically, seeing the connection between all things. There was an intrinsic understanding of the link between the physical/outer world and the spiritual/inner world.

Most of the Celtic myths we have with us in practice have evolved over time. Many have been interpreted into the modern Neo-pagan traditions based on the book The White Goddess by Robert Graves. The Tree Ogham has roots in Druidic history but is also part of the re-invention tapping into an inherent understanding of the Green World, the mighty trees and an understanding that magic and symbolism are dynamic and evolving constantly.

For the Druid's trees were sacred, an outward symbol of the cosmos manifested here on Earth and beings of great wisdom which held memory. When gathered together in a grove the vibrational field is heightened. The branches of each tree reaching up towards the heavens with deeply connected roots spiraling down into the womb of the earth. Sacred groves were referred to as nemeton, these were ancient sites of worship with very old trees. Many of these sites were cut down by invading Romans and later by the church as a way to dissipate the strength of the Druids and their holy places.

Regrettably humans have not learned the great value of our forests and trees, despite several movements throughout the world working diligently to save and restore our woodlands. Instead of the plight of Roman invaders and religious zealot now we face the Corporate entity with its ferocious, greedy appetite for all the natural resources Mother Earth has to offer. As an alternative the Corporation offers us synthetic, mass produced, industry made replicants.

As my continued contribution to the greening of consciousness I've created a new, ongoing series, based on the Tree Ogham, handmade with intention, respect, tinctures, infusions and the vitality of nature. They are great draughts of wisdom from the Green World, magical elixirs meant to connect each of us to the verdant entities yearning to share their knowledge and heighten our inner and outer awareness.

Let us begin with defining a few words and setting the stage. The word Ogham or Ogam is an ancient script developed most likely by the bards of Ireland in search for a sacred form of communication. Ogham script is seen as a line with smaller intersecting lines and notches most often carved into standing stones. Sometimes these lines could be found carved on trees and there are also individual characters with reference to specific trees. Ogham is also a form of linguistic communication that was used by "heroes, champions, bards, and druids"1 which most likely predates the script and alphabet. Steve Blamires, author of Celtic Tree Mysteries: Secret of the Ogham suggests that the Ogham language was not a spoken word but developed as an inner form of communication between us and the trees, or our own higher self. 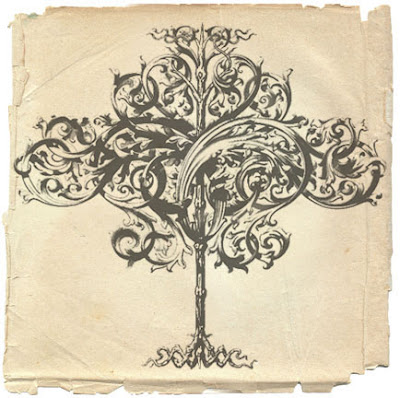 The Celtic Tree Calendar is one of the Neo-pagan traditions mentioned at the start of this post. For the Druids our modern system of compartmentalizing time did not exist. They were deeply, spiritual beings living very much in the here and now, time was fluid and cyclical tuned into planetary movement. Even the Wheel of the Earth with its eight holy days stems from Celtic revivalists.

The Book of Ballymote has two Tree Alphabet lists both beginning with the letter B for Birch, one consisting of twenty four letters and trees and the other with twenty six. The Steve Blamires book lists twenty trees to begin practical magic work. This is the main book I am using for my inspiration as it is the one that feels most grounded and balanced.

Below is a list of the twenty totems within this Basic Tree Ogham, keep in mind that not all are trees, but plants found within the Celtic forest:

Posted by Illuminated Perfume at 4:15 PM