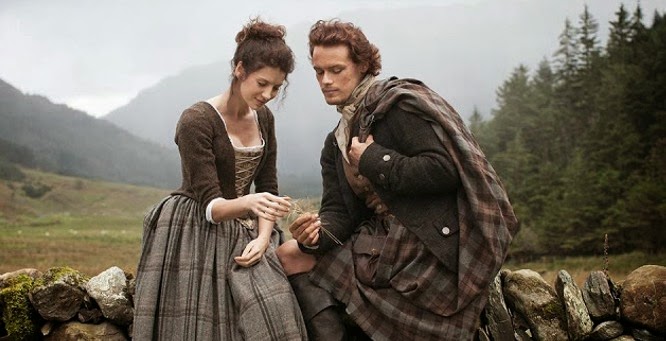 The uber popular book Outlander, by Diana Gabaldon is due out this week translated into new mini series by the Starz network. Although Outlander had been mentioned to me in passing at the San Francisco Artisan Fragrance Salon by Sarah Horowitz, the novel didn't get firmly planted into my consciousness until mentioned to me by Beth Schreibman Gehring. Madame Gehring and I share a passion for scent, herbs cooking and things more pagan in nature. If you are a old time reader of this journal you may recall the Perfume Illuminated posts that we collaborated on which has gone out to influence many regular series on other perfume blogs.

Outlander is one eight books that was first released in 1991 as a historical fiction love story that steps into the realm of sci-fi fantasy. I started listening to the book on tape, thanks to Audible, on our drive down to the San Diego Comic Con. Since then I've become obsessed listening whenever I get a chance. Five of the cast members and the author Diana Gabaldon were part of a panel at Comic Con. Here's the trailer for the series along with the presentation.


When I first started listening to the story I immediately thought of John Carter of Mars because of what transpires with the main character, albeit not quite as fantastical as the Edgar Rice Burroughs novels. As the story unraveled I became extremely curious as to why the book had not crossed my path in the nineties! After all, I was devouring such stories as the Medicine Woman series by Lynn Andrews and the Marion Zimmer Bradley books The Mists of Avalon.

Beth has asked me to create an Outlander inspired fragrance, which I am thrilled to orchestrate. At this point I have so many ideas I feel a bit overwhelmed. I'm sure that once I am done with the book I'll have a bit more clarity as what direction to go in....or not, which is fine to, since creativity is very chaotic.

The first episode of the series is available for free to watch now at the Starz site here. The season premiere will officially take place on Saturday, August 9th. Beth has created a fanpage of Facebook titled Outlander Love Affair.

Roxana....
We are going to have SOOOO much fun! I'm so excited to be working with you again my dear! I can't wait to bask in your scented interpretations of my favorite book....XOXOXOXO....

I am so excited for this show. I have been a fan of Ms. Gabaldon's books for many years, have traveled many miles to see her speak, and even though I don't have cable I will be first in line to buy the dvds. I did catch the first show on youtube and I am very satisfied with the interpretation so far.

The idea of a fragrance based on the books sounds wonderful. I can't wait to see what blends you decide upon. Smells/scents are such a large part of the books. I'm particularly curious what scents would be associated with Jamie.(uh, unwashed male?;)