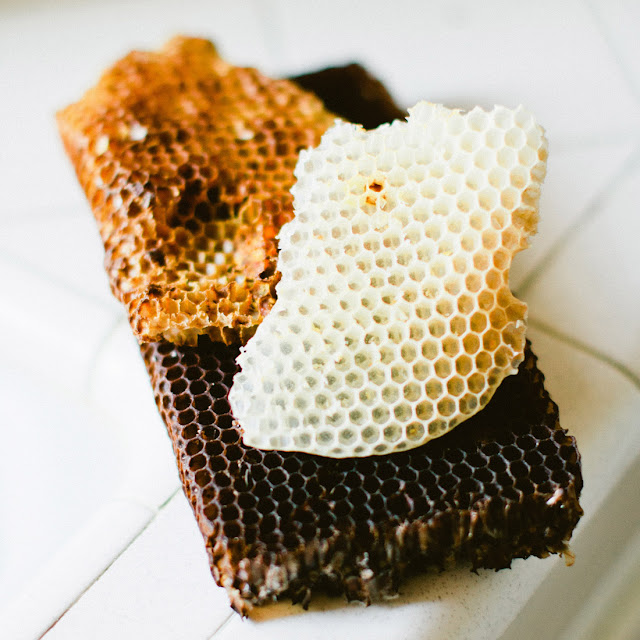 The color of honey comb can vary greatly depending on how much its been used by the honey bees. When the our little alchemist, along with her sisters, begin to build comb, it is almost pure white, as you can see from this piece which was only a few days old when we moved our first hive from the compost bin to a box. 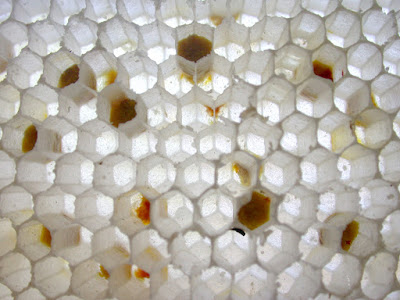 Most often, at least when I have saved feral hives, the is an overabundance of dark brown, almost black comb. Early on in our bee saving missions were advised to keep this dark comb so that the bees have something already in place to start using immediately. However, over the years we have noticed that new and established colonies don't like old comb. I'm not sure why this is. I would guess that one hive might not like the "scent" of another tribes comb as being part of the challenge. Perhaps over time the comb has less vitality or nutrients, or an energetic blueprint which they no longer are interested in. These are all guesses.

Another challenge to the old, dark strange comb is that when melted down and used for perfume and other bee products it becomes a sticky black mess with relatively no usable beeswax, its also extreme fire hazard. I am still searching for creative ways to use this old comb. 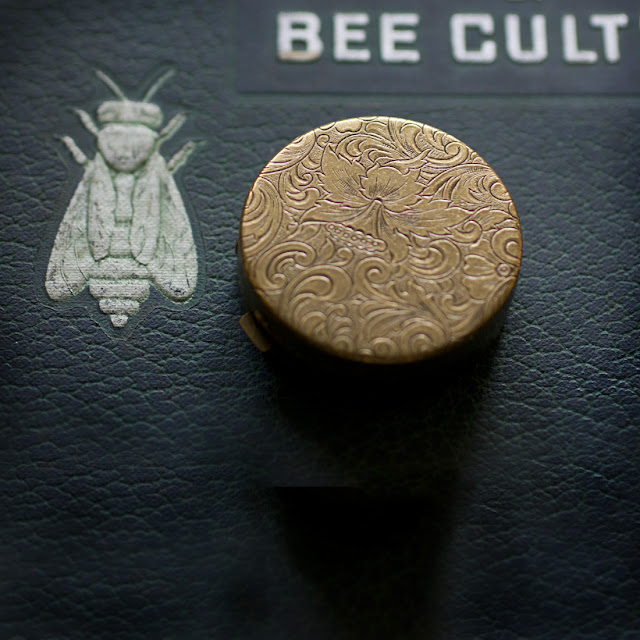 Speaking of creativity, I can always tell when an individual is inspired by one of my elder creations, not only because my intuitive antennae starts twitching but also by e-mails I start getting. For example, a few months ago I was being bombarded with e-mail asking for To Bee. I thought perhaps it was that the fragrance had been recently featured on a blog, but after research throughout the web universe I found nothing. When I asked the people contacting me how they had heard about the perfume they either did not answer, or mention that they read about it online but would not share the link. Thus my Virgo aspects kicked in and I started wondering about those cats who copy because they aren't very tapped into their creativity. Sure enough, I was right. When this transpires I take a deep breath, pity the individual and move on to the notebook I have where I download my ideas onto paper on a daily basis from the Universe, instead of checking out what others are doing and secretly ordering samples to be copied...or attempting to copy.

As artist lifer, whose livelihood is based on my very unique self expression. It sucks when others recreate or re-use something I worked hard on with no respect for the original content, copyright, or trademark. It takes time, energy, blood, sweat, laughter and tears to produce this mini empire including original content as imagery, written texts, packaging, the actual products, etc. It's heart breaking when other grab images, words and ideas with absolutely no respect...even worse are the ones who are unconscious of what they are doing. Sure, we are all one big collective, and in that big consciousness soup ideas are available to everyone, but that's not what I'm referring to.

Meanwhile To Bee in her other formats will be back shortly. The fragrance was created in 2011 to bring attention to the challenges that this little insect is having due to GMO's, insecticides and an overall lack of consciousness from humans on the planet. Here's the link to a post here at the journal with the To Bee lookbook and a few comments I pulled from the Fragrantica site:

"A real, raw honey smell combined with some sort of spicy, animalistic notes. Not a edible honey, but closer to smelling an actual hive. LOVE. It has the low longevity and silage of natural perfumes, unfortunately, but it seems to perform relatively similar to other real botanical scents I own."
~ LauraB613, August 24, 2013

"I was expecting more honey notes, but I pick up a lot of woodsy, spicy ones too.
The smell reminds me of the Sonoran desert after it rains. Rich + full bodied.
This is a complex, well-balanced + grounding creation."
~  priyalugus, January 13, 2016

"To Bee is olifactory joy. You think just honey and beeswax? No, this is more complex and spicy...a raw natural scent that makes you want to sniff, sniff, sniff.....to figure out all the ingredients.
If you love edgy, raw nature scents, you'll love To Bee."
~ Bab, October 8, 2012

Images and written context is not yours to steel, ask first. Opening photograph is by Rebecca Fishman during a photo shoot at our woodland cottage. Other photos and all content is ©Roxana Villa
Posted by Illuminated Perfume at 2:22 PM