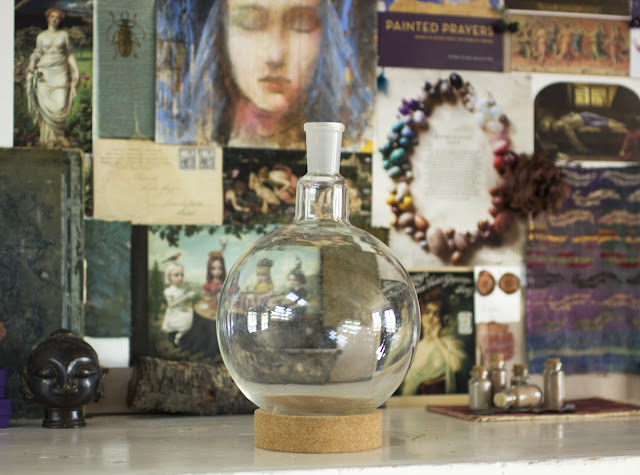 This past weekend was Imbolc, one of the markers on the Great Wheel, this earth festival is also referred to as Candlemas or Oimealg. Of the eight turns of the wheel, it is one of the minor holy days, albeit still significant. The fire we kindled at Yule (Winter Solstice) now burns bright in the bellies of the herd animals. The word Imbolc comes from old Irish meaning "in the belly" and is a time to honor the Celtic goddess of fire and hearth, Brighid.

The opening photo is one of the glass flasks I have at the perfumery, a terrific symbol depicting the “belly” of the alchemical process, as we transform matter, and/or our selves.

In Irish mythology, Brighid is the patroness of poetry, smithing, medicine, arts and crafts, cattle and other livestock, sacred wells, serpents (in Scotland) and the arrival of early spring. As one who crafts with words and healing plant medicine, I honor this Goddess and ask her to watch over me and my craft. Did you know that in some theories black smiths were considered alchemists? The reference comes from the symbolism of the black smith purifying a base metal.

Brighid, like Hecate, is a classic triple Goddess, in some legends she is portrayed as having two sisters who were also called Brighid, and typically treated as three aspects of a single deity.

The Christians that invaded the northern lands changed the name of Imbolc to St. Brigid's Day, grafting the pagan mythology to that of the Christians. She has been called  "complex and contradictory” by Winter Cymres of the Order of Bards, Ovates, and Druids:


"She possesses an unusual status as a Sun Goddess Who hangs Her Cloak upon the rays of the Sun and whose dwelling-place radiates light as if on fire. Brigid took over the Cult of the Ewes formerly held by the Goddess Lassar, who also is a Sun Goddess and who made the transition, in the Isles, from Goddess to saint. In this way Brigid's connection to Imbolc is completed, as the worship of Lassar diminished, only to be revived later in Christian sainthood.”

Imbolc is the time of the year when we can visually see the buds of Spring appearing on plants. Here in the high desert of New Mexico I am seeing little red shoots on my rose as well as our native Cottonwood trees.

The imagery associated with Imbolc includes: milk, cows, the plough, straw or wheat, corn dolls and crosses woven of wheat. The herbs associated with Imbolc that are also found in the palette of the botanical perfumer include: Angelica, Basil, Bay, Benzoin, Iris, Tansy, Myrrh, Wheat absolute and Violet. This combination would actually make a rather interesting start to a botanical perfume devoted to Brighid and Imbolc. I suggest creating it in three part, such as three chords representing the maiden, mother and crone aspect of the Goddess. I have more ideas as well, but I will save those for the blending group I am in the process of forming with graduates of the Art of Botanical Perfume.

Posted by Illuminated Perfume at 4:55 PM