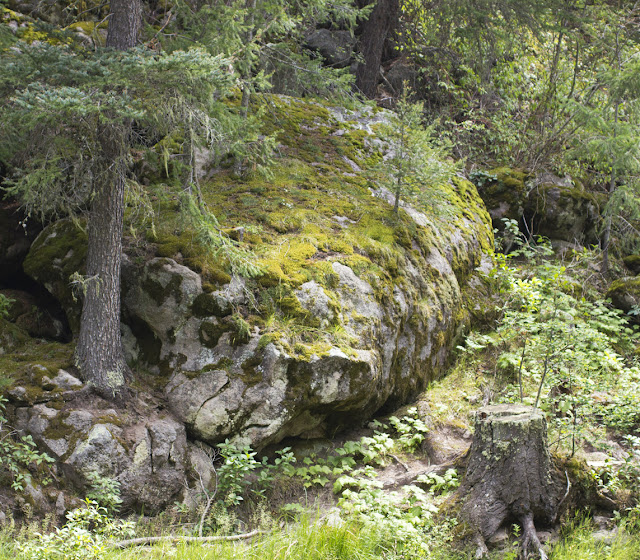 On Monday, August 17th, we decided to head toward the Jemez Mountains and River to get some forest bathing in from a different area than our usual fifteen minute drive up to our local woods. Since we had not been to the area, and most of the lodging sites that met our criteria were booked, we deemed the trip would be more of an "exploratory mission" for a grander, future adventure. 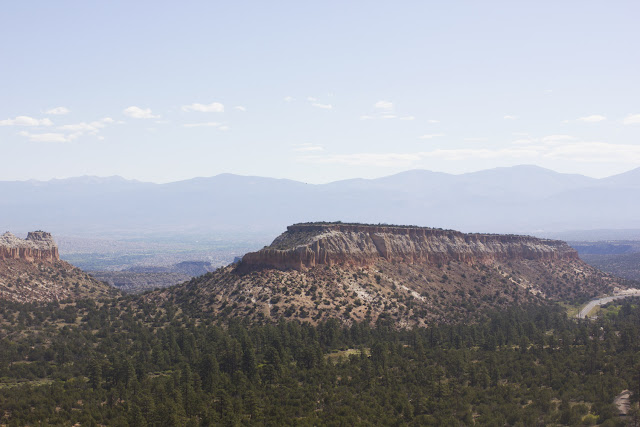 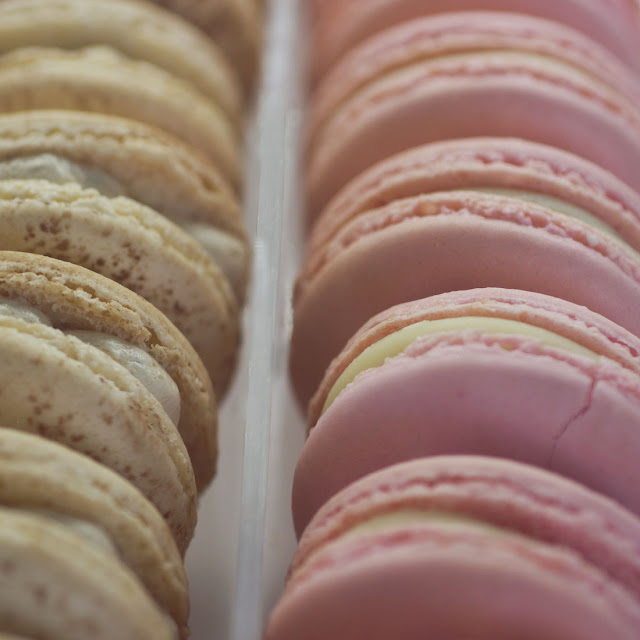 From Santa Fe we headed North for 35 miles, up winding roads toward the town of Los Alamos where we stopped at the French cafe Fleur de Lys to grab a few items for a picnic in the forest. I find the city of Los Alamos slightly creepy, mostly due to its history with creating nuclear weapons and the Manhattan Project where the government recruited scientists to live as virtual prisoners during the infamous Manhattan project. There is a quiet, unsettling energetic quality in the Los Alamos area, reminiscent of The Hawkins National Laboratory from the Stranger Things TV series or perhaps a better example is the high-security facility in Guillermo de Toro's The Shape of Water. 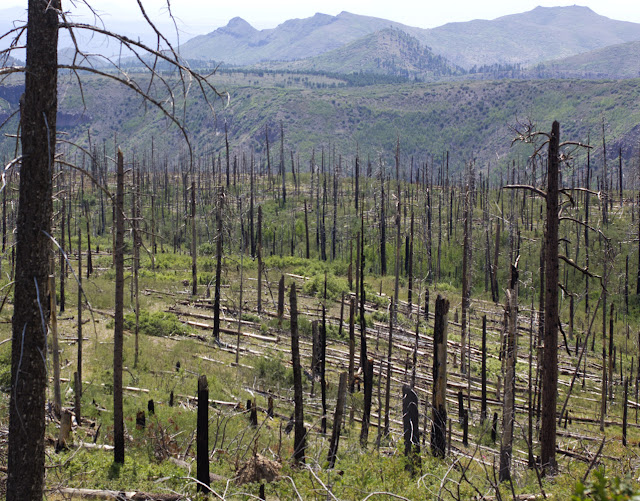 As we drove through the town, past Oppenheimer Drive, (named after Julius Robert Oppenheimer, the theoretical physicist credited with being the "father of the atomic bomb") that uneasy feeling continued, exasperated by the charred trees viewed topping the mountain above the city. The skeletal trees sticking up out of the landscape like matches were due to the Las Conchas Fire of 2011, that burned over 150,000 acres. Both Greg and I felt emotionally impacted by the sight of the devastation. Little did we know that a fire had started in the Rio En Medio area of the Santa Fe National Forest. Perhaps on an unconscious level we were picking up on it.

Luckily the forest that burned in the Las Conchas wildfire is slowly coming back, evident by the scrub oaks and aspens. I asked a Forest ranger about this and she confirmed my suspicion explaining that pioneer trees appear first. The scrub oak is one such tree, arriving on the scene early, as a slow-growing tree that are unpalatable to livestock and thus able to mature at significantly reduced sizes in arid, nutrient-poor soils, under harsh conditions. Other common pioneer tree species include red cedar, alder, black locust, most pines and larches, yellow poplar and aspen. 1

As the scrub oaks become dominant, their crowns form a thick canopy laying down a layer of leaves to produce mulch and, eventually, soil. By the time they have matured (which can take 40 years or more), the oaks have produced a layer of relatively rich, crumbly topsoil under a mulch of forest litter. With continuous cover, the forest soil will now be shaded and cool, and humidity within the environment is increased providing hospitable conditions for the taller trees to move in. They could not have survived in the harsher environment which the scrub trees prefer. But thanks to the enhanced soil and air created by the scrub forest, the taller trees are soon thriving. They’ll eventually shade out the older, shorter, slower-growing scrub. Once that occurs, then a “climax” forest has begun to form. At this point, the woodland is returning to a steady state of relative stability, and is on its way to becoming a mature forest once again. 2

This is reminding me of the slow moving Ents from Lord of the Rings, and how human time is completely different from the great cycles of nature and trees.

Continuing on our journey along Highway 4, we descended down into the Valles Caldera National Reserve, the site of "a spectacular volcanic eruption created the 13-mile wide circular depression now known as the Valles Caldera"3 over 1.25 million years ago. 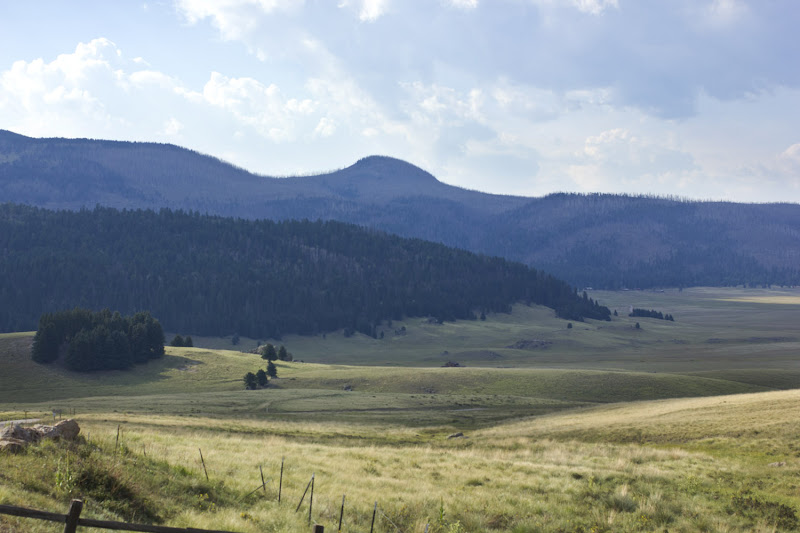 The beautiful view of the Valle Grande meadow contains what appears to be an island, Cerro Jara, rising out of the expanse of prairie. It was humbling knowing that we were standing on the site of major magma flow as recently as 50,000 years ago. For context, the incident which created this magnificent valley was formed by an eruption 500 times greater than that of Mt. St. Helens in May of 1980! Regrettably the photo above does not quite do the beauty and magnificence of the scene much justice. 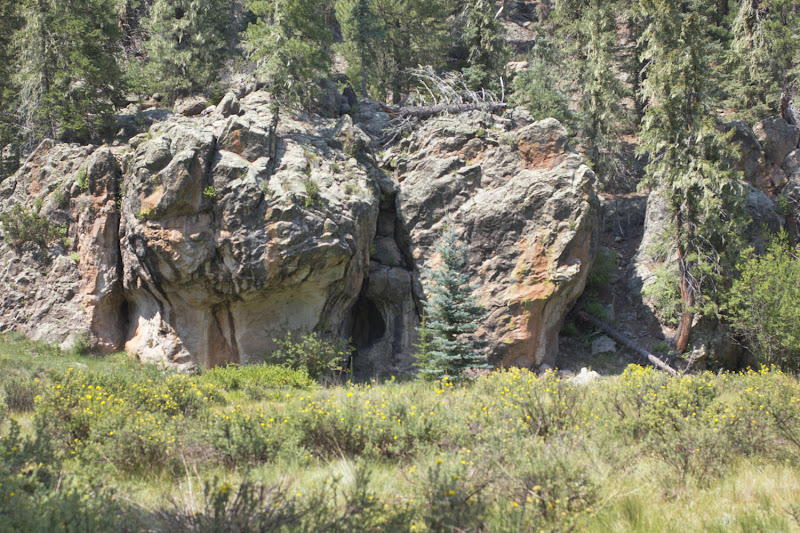 Continuing along highway 4 we arrived at what we thought was going to be the first stop on our adventure, the Las Conchas Trail, which is located along the East Fork of the Jemez River. We parked and headed in stopping along the path to have our picnic lunch and then continuing along the scenic trail.

Before moving forward with this tail, let's chat about the word concha for a moment, since I can almost hear my Argentine family and friends chuckling.

In terms of the people of New Mexico, what first comes to my mind is the indigenous, first people of tribes such as the Navaho and Zuñi, regrettably the Spanish Conquistadors, who arrived in the 16th century were the ones to put names to places, streets, etc. Thus, instead of having names that stem from the tribes, instead you have many Spanish words.

When a couple friends mentioned going to Las Conchas trail, I chuckled and thought of my mom, who would scream "La concha de tu madre!", when she was angry. Concha in Argentina, where I am from, as well as other South American countries is an insult, it means vagina. The literal translation is "Your mothers cunt!" In some countries however concha means sea shell. Although the phrase "La concha de tu madre!" is used as a swear phrase in Argentina, it's not found to be offensive as the english equivalent "cunt." 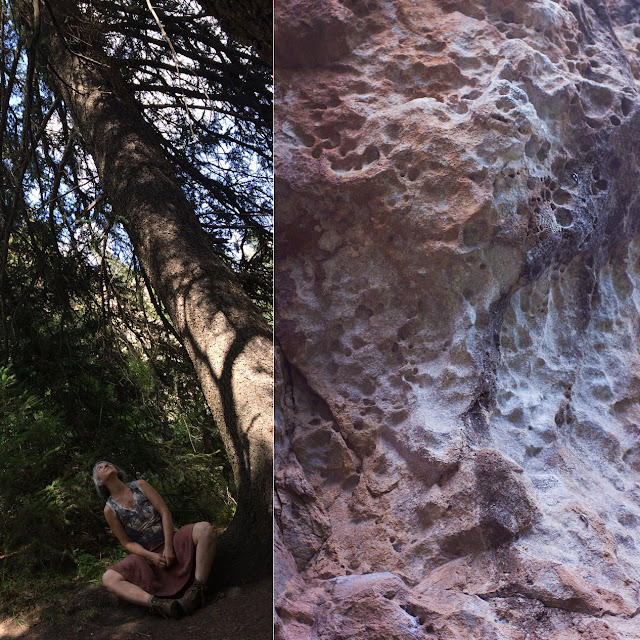 On our way back to the car, we stopped for a little meditation and connection with the mighty Ponderosa trees, those tall, fragrant dwellers of our forest. Auspiciously my attire for the day matched the rock face in both color and texture.
As I mentioned at the start of this tale, our plan was to head further into the area of the Jemez Mountains, specifically to find a soaking spot at one of the nearby outdoor hot springs, but we were too exhausted from an afternoon of sun, instead we headed back home to our casita in Santa Fe for hot baths in our porcelain tub with epsom salts and my essential oil tree blend.
Photos & Words: ©RoxanaVilla
1 & 2  Frontline Wildfire
3 Valles Caldera National Preserve website
Posted by Illuminated Perfume at 11:39 PM