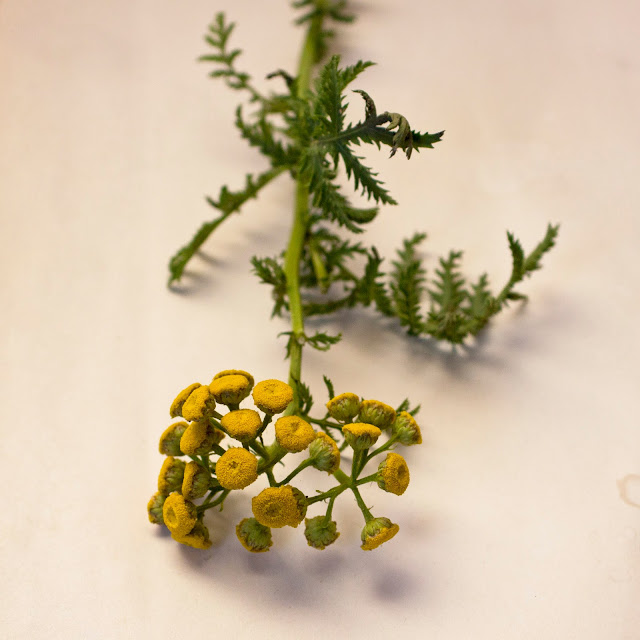 We have Blue Tansy growing in front of our casita here in the high desert, just next to the lilac bush. I didn't realize what the plant was until a few weeks ago when it finally gave is one little bunch of flowers. As you can see in the photo, the little flowers are a bright, deep yellow hue and the foliage is similar to yarrow with its fern-like soft, green leaves.

I remember reading about it when I studied aromatherapy and the "blue" oils, but never delved into it much as a perfumer because I perceived the earthy scent was too medicinal. Fast forward from the mid nineties to this moment, when my blending skills have gotten much better, I can indeed imagine using it in a perfume.

The blue tansy flower, Tanacetum annuum, is part of the chamomile family, originating in the Mediterranean but now grown and cultivated in Morocco. The reason it goes by the name "blue" tansy is due to the compound chamazulene, which as the name implies, is blue. The essential oil is said to be calming to the skin and helps us feel grounded and relaxed. Very important attributes for these rather wild times we migrating.

As I work on bringing back the aromatherapy synergies I was making in the 90's, I look forward to working with this very special essence. Some of its attributes includes:

1. Assisting with inflammation due to these compounds:

The word "inflammation" refers to an abundance of heat, usually revealing itself as redness and swelling of the skin as well as the emotions. Consider the words "in flame", referring to fire and the color red, now consider how this oil is blue, thus when applied swelling and redness may be diminished.

Aromatherapy books refer to this oil as aiding in providing a sense of relaxation and grounding.

There is evidence that Blue Tansy is anti-bacterial and helpful with congestion and support of the respiratory system.

As mentioned above, consider the heavenly blue hue of this mighty oil as a clue to how it can be used. Blue, like water, provides moisture, thus where there is dryness, bring in the water.

Since evidence exists that blue tansy reduces nasal congestion, the oil has been used in blends as an antihistamine. Here in New Mexico, as the chamisa begins its flowering season, this will be one of my go to essences to diffuse and put a few drops into a bowl of warm water for a steam inhalations. Consider that when we do steam inhalations we get the affect of providing moisture to our lungs and the skin, while assisting our lungs and providing emotional support.

For those of you, who like me, prefer to keep insects away, there is evidence that blue tansy oil can aid in keeping some insects, like mosquitos, away.

I plan on ordering a kilo of this essential oil directly from the distiller, if you are interested in participating in the order be sure to send me a note to: roxana @ roxanavilla.com.

Posted by Illuminated Perfume at 12:09 AM