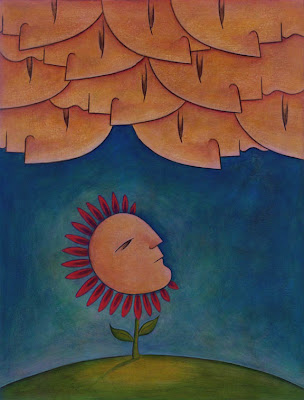 In the nineties, when I created illustrations 24/7, I contributed an image for an article in National Geographic on how plants communicate with each other. Recently I've come to learn about the inherent wisdom in California native plants, including the way they share water with each other and network for the greater good of the community.

In the Science section of todays New York Times there is an article titled "Loyal to Its Roots" regarding the inherent wisdom within plants. The article mentions the California dodder, a plant we've recently noticed on our walks in the Santa Monica Mountains. Being fans of fantastical art forms we invented a story about it being a plant from outer space. Surely when you see its bright, neon orange color, among the other subdued coloring of native plants, one would assume it's a transplant from another planet. Who would have guessed it's a California native! I haven't checked to see if it has an odor.

There is a terrific book that came out in the seventies, briefly mentioned in the NY Times article, called The Secret Life of Plants. A must read for all those devotees of the plant kingdom.

The illustration above is not the one used in Nationa Geographic, that one I can't seem to find a scan of. The image above was a cover of a Business magazine ©Roxana Villa.
Posted by Illuminated Perfume at 8:05 AM