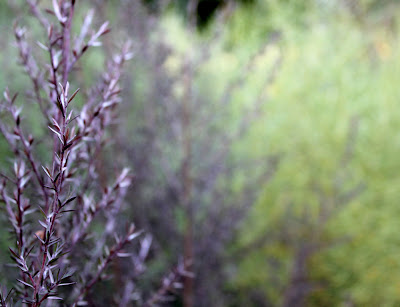 Saturday in the late afternoon, once all the orders had been packed, I headed over to my local family owned nursery. Autumn is the best time to plant here in the woodland because of the amount of rain we tend to get. Mom had given Greg and I a gift certificate for Christmas which I had saved just for this time of the year. 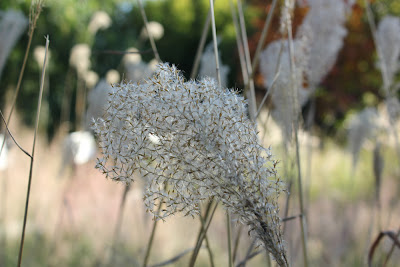 Potted grasses at the Nursery in late afternoon sun
I had my heart set on rosemary for the south border of the lot to create a nice screen from the neighbors while providing an extra food source for the honey bees. They absolutely adore the rosemary ground cover on the back slope. Other perks are that it grows well here and can handle the summer heat with little water.

For the front slope, which is the biggest and barest part at the moment, I wanted to pick up more sages, matilija poppies, artemesia and cistus. All of those are performing fabulously, with the added benefit of providing more nectar and pollen sources for my little winged friends.

I also was keen on picking up some violets. My mom brought over a nice sized clay pot of a cutting from her garden, which are the ones I use in the tincture for Gracing the Dawn botanical perfume. Since they are coming up gangbusters in her garden I figured perhaps its a good time to purchase them. No such luck, the nursery doesn't carry them, thus I will have to go elsewhere. 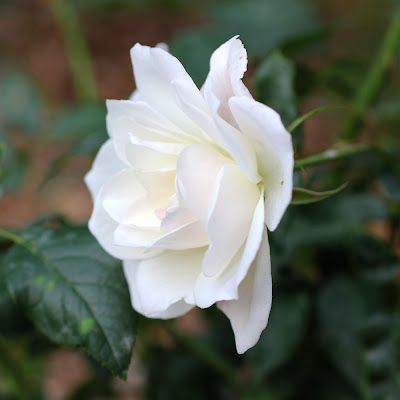 The nursery was however, well stocked on rosemary, sage salvia allen chickering purple rock rose cistus purpureus and the hardy white iceberg roses. No matilija poppies though. Thus we loaded up the car and on Sunday I spent almost all day digging holes
in the front slope. My initial idea was to put the white roses in between the native Rosa californica down along the bottom. However, when I started digging I realized that most of the entire front edge of the property is granite. Thus, instead, I dug out the native roses and moved them to the midslope area, on the other side of the matilija poppy batch. I'll be putting the cistus, aka rockrose, down at the bottom. The one I currently have in that location is doing great, unlike the roses that seemed very sad.

As I dug out the California roses I was quite shocked to see that they had actually managed to send shoots of roots down INTO the granite! My goodness. In text where I have written descriptions for my perfume Rosa, inspired by the native rose, I mention it is "an ancient survivor of the California woodland." I now have new respect for the plant and the term survivor. I hope it will be much happier in the mid-slope area where there isn't quite as much hard granite to deal with. Fingers and toes crossed. Meanwhile the cistus, aptly named "rock rose" should be quite happy down there. 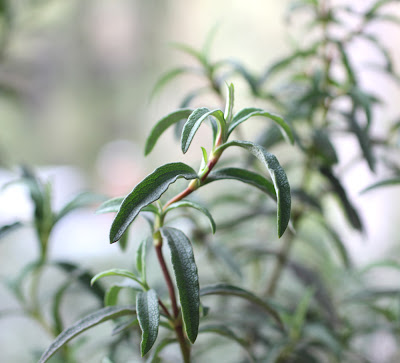 photo: Cistus purpureus
The garden, after five years is finally starting to come together a bit. I'd still like to get rid of the icky Eucalyptus trees and plant more oaks in their place. However, in the meantime, the California cottage look is coming along quite nicely. By spring I should have some nice photos to share. 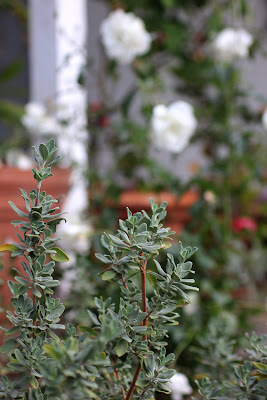