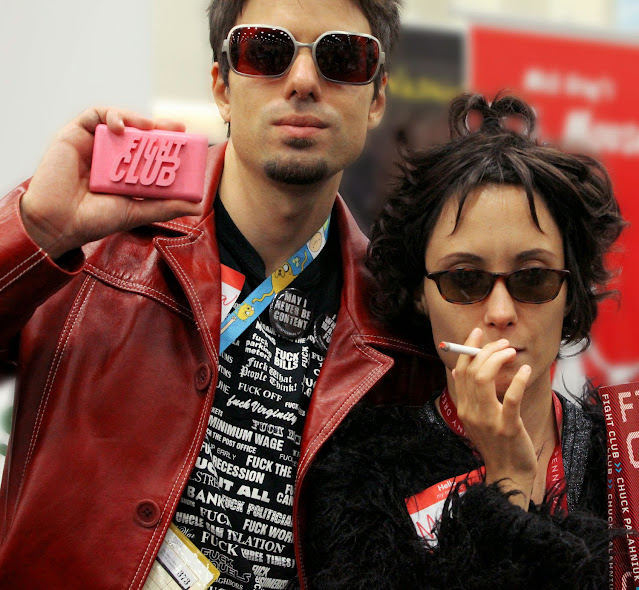 On January 31st, 2017, I wrote a Movie Monday post that echo's some of the thoughts I am about to share. The difference is, that in 2017 I felt comfortable in sharing my feelings and being out spoken. Fast forward to present time, where life is quite different and many have started using code words to avoid the sen sir. So hard to believe this is occurring in 2022, in what once was the land of the free.

What felt like doom and gloom after the 2017 election was just a primer for what was to come. Auspiciously, the film Fight Club, released in 1999 and directed by David Fincher, also reeks of the searing burnt flesh my soul was feeling back then.

Watching Fight Club again, in the winter of 2022, is uncomfortably prophetic. It is a masterpiece of film making, which like the original Blade Runner, was castrated by critics at the time. Yea, its gritty, dark, bloody and muy, muy macho, so much so that most sensitives and feminist's won't be able to sit through it. I don't plan to share any spoilers, just in case you haven't read the book or seen the movie.

What makes this film brilliant, besides the impeccable acting by Edward Norton, Brad Pitt and Helena Bonham Carter, is a combination of Fincher's direction, stunning visuals, brilliant editing with an equally brilliant sound track. The original novel the film is based on was written by Chuck Palahnuik. Published in gluttanous 1996, a young man is confronted with the emptiness of his life as a white collar worker. Set mostly in an edgy, city environment of nocturnal animals, similar to the underbelly of Batman's Gotham City, the story telling and dialogue are smart as we are shown a picture of just how tragic modern life in a bustling metropolitan city has become.

The film reveals more about our lives than is comfortable to confront, particularly in the hindsight of current reality, as more and more people fall into depression and suicide rates continue to escalate. Fight Club is a symbol of what happens when the masculine completely loses its soul, where the lower chakra runs the show, where boys never grow up and humans blindly follow a Trojan Horse or Emperors without clothes. The main character lives a soul less life, living within a concrete grid without the benefit of dreaming. He wonders through his life in a self induced somatic state, feeling small and worthless until the hip, confident Tyler Durden enters the picture. Tyler is everything our protagonist is not, sexy, handsome and energizing, he represents an even more dangerous persona than the lost insomniac. One of Tylers slogans is "empowerment through chaos & disruption", which as someone interested in personal growth, I totally get.

The prophetic aspect of Fight Club includes the destruction of buildings via controlled demolition by a group of terrorists. Consider that the film premiered at the Venice Film Festival on September 10, 1999, two years almost to the day the Twin Towers came down.

There is also this idea of "fighting" that we all must ponder. Why are we fighting each other, doesn't it make more sense to fight the beast among us instead? Is the true monster a difference of opinion, blue versus red, or is the true monster the corporate regime that has blinded and muzzled us? As some of us attempt to fight back with small or large acts, we are met with individuals in daze of righteousness and obedience, often resorting to childish name calling.

Getting back to the film Fight Club I am intending that we will rise above the some of the ugly aspects in the film that are mirrored in our everyday lives, such as being ruled by a patriarchal system, the feeling of living a soul-less life in a somatic state and a need to slay each other. The real task before us is to shine the light on what is lurking within our own shadow realm, inside of us. What is it that keeps us feeling separate from our fellow human beings. Your mission, if you choose to accept it, is to:

It's a very chilly and windy evening on this last day of February, I am aware that the planet Uranus, associated with revolution and the unexpected, is square to Saturn. This placement is auspicious and signals change during these intense and turbulent times. Instead of staying safe, I practice cultivating love, peace and aligning with The Green Knight...cutting off my head (the ego / monkey mind) and operating from the heart.

Opening image from the San Diego Comic Con in 2014 ©Roxana Villa, screen shot of Brad Pitt found on the web from the film Fight Club.

Posted by Illuminated Perfume at 10:17 PM